I Jab Your Parody, I Jib Your Satire 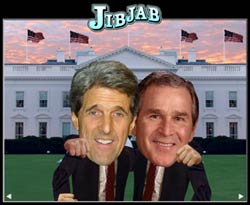 As RJ mentioned here, JibJab.com has a very funny, balanced even, parody/satire (the distinction is critical) flash animation movie with President George Bush and Senator John Kerry singing to the tune of Woody Guthrie’s “This Land Is Your Land.”

The publisher of the song is miffed and making threatening noises:

The bit is hilarious. Unless you are The Richmond Organization, a music publisher that owns the copyright to Guthrie’s tune through its Ludlow Music unit.

“This puts a completely different spin on the song,” said Kathryn Ostien, director of copyright licensing for the publisher. “The damage to the song is huge.”

TRO believes that the Jibjab creation threatens to corrupt Guthrie’s classic — an icon of Americana — by tying it to a political joke; upon hearing the music people would think about the yucks, not Guthrie’s unifying message. The publisher wants Jibjab to stop distribution of the flash movie.

Of course the creators behind Jibjab don’t agree.

“We consider it a case of political satire and parody and therefore entitled to the fair use exemption of the copyright act,” said Jibjab attorney Ken Hertz.

So far there isn’t a lot of money involved. The brothers who made the movie, Gregg and Evan Spiridellis, have been distributing it pretty much for free (a paid-download option was available, but abandoned as most folks went for the free-on-the-Internet route).

….Right now lawyers for both sides are just hurling threatening letters at one another. If the dispute ends up in court, it’ll be interesting. [CNN]

What’s also interesting about the story is the debate between copyright poobahs regarding the legality of the film. Lawrence Lessig says it’s a satire, not a parody, and therefore not covered by fair use:

As any copyright lawyer recognizes, it is not a “parody” in the sense that “fair use” ordinarily recognizes it. A “fair use” “parody” is a work that uses a work to make fun of the author. JibJab is using Guthrie’s work not to make fun of Guthrie, but of the candidates. (For the now classic case on this, see Dr. Suess v. Penguin Press, where a “parody” of O.J. Simpson using The Cat in the Hat was not “fair use.”)

The JibJab video would likely be considered satire, because the video does not directly target the original song. The clear target here is Bush and Kerry or politics/society in general. Also, if the video is a commercial use of the song, that will hurt JibJab’s case. Commercial use is loosely defined, that the video brings people to a site where there are things offered for sale would be enough.

Since you have to watch a commercial before you can see the movie at JibJab, it sounds “commercial” to me.

JibJab’s wonderful parody undermines virtually every element of the original meaning of Guthrie’s song. Where Guthrie’s song is provocative understatement, JibJab’s is merely provocative. Where Guthrie’s song is one of unity, JibJab’s version both mocks and ultimately supports that ideal. In a year in which the red/blue divide is frequently debated, Guthrie’s call for unity would seem to be ripe for this sort of parody. Guthrie was a supporter of communism, but his America has become consumerist (which JibJab notes perfectly). Guthrie sang songs to raise political consciousness, JibJab mocks political consciousness.

For most, Guthrie’s song has been co-opted as mindless patriotism (“God Bless America” vs. the original “God Blessed America”). JibJab’s parody liberates the song for us to think about and consider again.

While at first blush it seems the fim is a satire of the election process, the media images of the candidates and political parties, Miller brings up some interesting points. I would say that at least an element of the film is a parody of the original song’s utopian ideals of sharing and sharing alike, while the very essence of the political (and legal!) process of the nation is oppositional, even antagonistic. The parody positively revels in the oppositional nature of the political process, coming to the quite perceptive conclusion that we are united through our opposition. Sounds like a feasible parody defense to me.

Book Review: ‘Rising Out of Hatred’ by Eli Saslow

'Rising Out of Hatred' by Eli Saslow shows the power of humanity and persistence in the face of one of the most powerful hate groups in the country.