No stranger to myth vs. reality, the author behind the Harry Potter series, J.K. Rowling, is now attacking Hollywood’s obsession with thinness.

Rowling, herself the mother of two young girls, has decided to speak out against the unhealthy message that is being sent to young girls: you can never be too thin.

Using Pink’s song “Stupid Girls” as an on-point example, the two have created an unlikely pair to send a positive message that “what’s inside is much more important than what’s on the outside.”

I couldn’t agree more. As the mother of young children and stepmom to young adults, I have seen these images of “thinness obsession” cause untold harm to otherwise beautiful young girls, while creating unhealthy messages of what’s beautiful to impressionable young men.

Our society is getting fatter, while we are being bombarded with unrealistic versions of what’s normal and healthy. Where’s the disconnect? 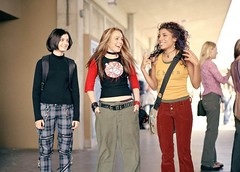 Hollywood and the fashion industry are mostly to blame. A perfect example is that whackjob Lindsay Lohan. Once a healthy-looking attractive teen, she has now become the embodiment of yo-yo weight loss and weight gain.

She even admitted to having an eating disorder (but of course later denied it) in an interview that, as far as I am concerned, showcased her spiral into dangerous self-obsession and solipsism. 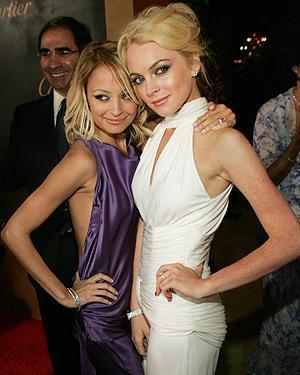 Lohan (with a similarly drained Nicole Richie at right) is just one example, but there are dozens who show a lack of concern for their health in an industry that forces them to choose between an attractive, healthy weight and an emaciated, anorexic frame.

Perhaps the disconnect is an inability to achieve this abnormal ideal causing so much stress that people do the opposite and adopt really unhealthy eating habits to cope.

But who can blame women for feeling stressed and unhappy about their weight to the point of paralyzing them into inaction and poor habits?

Dieting is a billion dollar industry in this country and until we come to terms with what is truly healthy and what is nonsense, it won’t change.

At least J.K. Rowling is using her fame and popularity to try to turn the tide and for that, she gets some serious credit.