Hamm: I’m Proud to Be of the Same Species

Because we drag our dead asses out of bed at 6am [editor – EASTERN], it has become our custom to watch the last hour-and-a-half or so of the Olympics from bed, drifting off to dreamland between verbal ejaculations from various intemperate announcers as gymnasts twist, spin and fly, and swimmers churn.

So, after favored American gymnast Paul Hamm fell all over himself, arms flapping, legs akimbo, plopping down unceremoniously on his butt literally at the judges’ feeet in a disastrous landing to his vault, earning himself a 9.137 score, we groaned and turned down the sound to barely audible and sent the 4 year-old off to her own bed for the night.

NBC gymnastics analysts Elfi Schlegel and Tim Daggett moaned and tut-tutted, stating unequivocally that Hamm was out of the running for the gold, and probably for any medal in the men’s all-around. Daggett ominously conjured up the image of Hamm lying awake and febrile, rerunning the mental movie of his Waterloo night after night until cold death’s blessed release – or something like that.

But Hamm didn’t listen: just on the verge of sleep I heard the voices rise and opened my droopy lids to see Hamm’s score of 9.837 on the penultimate event, the parallel bars, and interest piqued, remained semi-conscious through the next rotation and Hamm’s spectacular high bar routine, which astonishingly yielded the exact same score of 9.837, giving him the gold by 12-thousandths of a point. 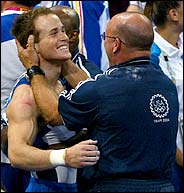 And this, my friends, is what the Olympics – and our fascination with sport in general – is all about: the magical, mysterious alloy of skill, strength, stamina, determination, and ultimately, self-mastery that makes us proud to be members of the same species.