A non-Disney version of The Jungle Book.

The Campfire Classics adaptation of Rudyard Kipling’s The Jungle Book is an illustrated collection of most of the Mowgli stories from the 1894 volume and its 1895 sequel, The Second Jungle Book. It takes the story of the baby raised by the wolves from his discovery and acceptance by the wolf pack to his eventual return to the world of man at seventeen. It includes his abduction by the monkeys, his first venture into the world of man and the killing of Shere Khan, his return to the wolves and his struggle to save the pack from the wild red dogs. It is an adaptation that stresses the continuity of the stories, and would make an excellent introduction to the larger work. 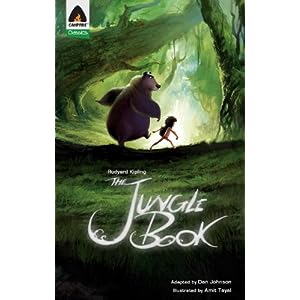 Aimed at an older audience than something like the Disney film adaptation, the illustrations, except for those of Mowgli as a baby and the baby wolves, tend to avoid saccharine cuteness. Although never really threatening, friendly characters like Baloo, Bagheera and Kaa have a darker tone than their Disney counterparts. Illustrator, Amit Tayal, does a nice job conveying the gritty nature of the material without overplaying the blood and guts. There is violence, but it is kept to a minimum — violence is, after all, part of Kipling’s story.

There are, of course, moral lessons to be learned from the stories. The narrative emphasizes the need for all groups to be ruled by law. Jungle law as it is explained by the animals is not the survival of the fittest. It is a system which guarantees all animals get what they need. “Good hunting all that keep the jungle law.” The rule of law benefits the whole community. Those who live outside the law are the villains, and what is true for the animal should be true for man as well. Unfortunately Mowgli’s first encounter with the community of man demonstrates that this might not always be the case. Kipling’s anthropomorphic animals serve much better as models of behavior in a communal society.

Like most of the Campfire editions two pages containing information about a variety of topics related to the book are included. Here there are short paragraphs discussing things like “Mowgli and the Feral Child” and “How Tigers Become Man-Eaters.” Hopefully this is the kind of thing that will encourage further investigation. Also, it begins with some very sketchy biographical information about Kipling. A new feature I haven’t seen before in the Campfire series is a poster which can be removed from the book and hung on a child’s wall.

From the time I first came across the famous series of Classic Comics back many, many years ago, I have always believed that illustrated editions of great literature were an excellent way to introduce youngsters to the pleasures of reading. The Campfire editions I have reviewed in the past — The Hound of the Baskervilles, The Three Musketeers — have reinforced that belief. This new adaptation of The Jungle Book is a welcome addition to their catalogue.

Parents who want to use the illustrated edition as a stepping stone to the original should be aware that both The Jungle Book and The Second Jungle Book are in the public domain. They are available in a number of places on line, including Project Guttenberg. They are also available for free download to devices like iPads.

Actress/producer/writer Paula Garcés and her husband Antonio Hernandez continue to expand their 'The World of Aluna' with a new graphic novel trilogy that continues the adventures of the South American superhero.