It is very easy for us to forget how remote many parts of the world still are, and few places are more remote than island chains like the Solomons in the South Pacific. With email carried by radio waves, the Solomons are a little less remote than they used to be:

But for the past four years, the People’s First Network has tried to mend fences by using high frequency radio to send and receive e-mail.

The project was recently a finalist for a Unesco rural communications prize.

The Solomon Islands consists of some 850 islands, mostly undeveloped, spread out over a wide area of the Pacific.

The two main ways of getting in touch with people are short-wave radios or satellite telephones.

But radio offers no privacy, whereas satellite phones are too expensive for most to use regularly.

The PeopleFirst Network stepped into this gap in 2001.

It was set up with funding from the United Nations Development Programme as a way of connecting the remote island to the outside world, as well as each other.

But another aim was to help overcome the legacy of fear and mistrust created by years of fighting between rival ethnic gangs from Malaita and Guadalcanal.

“We thought that by connecting people together, they would know more about each other and bring peace to the country,” said Joe Rausi of the PeopleFirst Network.

….At the moment that are 14 e-mail stations in schools or clinics in rural areas. The stations are owned by the community, with decisions taken by a committee of village chiefs and religious leaders.

The stations are a pretty basic affair, consisting of an ageing laptop, radio and modem. The kit is powered by a car battery, which itself runs off a solar panel as in most areas there is no electricity.

….At the heart of the operation is an internet cafe in the capital, Honiara, which connects to the internet via satellite.

Several times a day, each e-mail station will connect to the hub in Honiara and transfer any messages.

The connection speed is around 2Kbps, meaning a typical text e-mail sent by rural villagers takes about 10 seconds to transmit.

….As for the future, the project is looking to move beyond e-mail and explore using the system for distance-learning and e-commerce.

The big hurdle here is bandwidth. But the People First Network is working with the Massachusetts Institute of Technology on using their Tek project.

Researchers at the Boston institute are developing a search engine designed for people with a slow net connection.

“if you are living in a rural village and you want information, you would send a message to Tek,” explained Mr Rausi.

“It browses the net for that information and once it is found, it sends that it direct to your computer and stores it on your C drive.” [BBC]

I don’t know about the peace-making aspect of this – emails can just as easily be flames as love notes, but the practical aspects are very real.

I wonder if the Solomon cannibals are exchanging recipes. 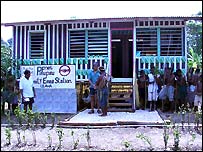 Tech Review: Mixcder E7 Headphones – Hearing Everything and Nothing

Book Review: ‘Rising Out of Hatred’ by Eli Saslow

'Rising Out of Hatred' by Eli Saslow shows the power of humanity and persistence in the face of one of the most powerful hate groups in the country.