20 years later Bob Geldof announces “Live 8,” a repeat of 1985’s Live Aid concert, with monster line-ups at five locations around the world to highlight the ongoing problem of global poverty and debt. “20 years on, it strikes me as morally repulsive that people die of want in a world of surplus,” Geldof said at a news conference announcing the shows. 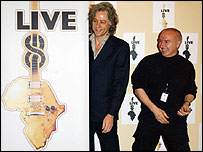 “We don’t want people’s money. We want them,” Geldof said of the five free concerts in London, Paris, Berlin, Rome and Philadelphia on July 2, with the specific goal of raising awareness of Make Poverty History, a campaign to get the richest nations to cancel debt and increase aid to developing countries. Geldof said 50,000 people in Africa die unnecessarily every day as a result of extreme poverty.

The timing of the events is just days before G8 leaders meet July 6-8 at Gleneagles in Scotland. Geldof said the G8 meeting provided a “unique opportunity for Britain to do something unparalleled in the world. There is more than a chance that the boys and girls with guitars finally get to tilt the world on its axis in favor of the poor.” Geldof wants a million people to travel to Edinburgh for the summit to make their voices heard, he said.

Geldof said that he had asked for the support of Pope Benedict XVI. “I think he should turn up. It would be his first gig.”

Elton John sat beside Geldof at the news conference and said he was “extremely honored” to be taking part in the event, which he added will feature “la creme de la creme of musicians.”

“Now I’m fully aware of what’s going on and seeing the injustices going on,” John said. The singer said he hadn’t been mature enough to appreciate the original Live Aid 20 years ago.

Geldof also said there was a strong possibility that the Spice Girls would reform for the UK concert. “I spoke to them this morning. It looks very good. That’s all we can say,” he told the BBC.

The UK government has backed the project, with Culture Secretary Tessa Jowell telling the BBC Live 8 will “set the scene” for the G8 summit.

Line-ups for the “Live 8” concerts:

With an impressive list of international directors providing interpretations of their own local legends, the blood-soaked 'Field Guide to Evil' brings surreal nightmares to life.