Frank Black, who is currently touring on his recent release Fast Man Raider Man, will be the musical guest on Late Night with Conan O'Brian on Friday, October 20.

Black, who is known as a founding member of the Pixies as well as for his long and formable solo career, recorded Fast Man Raider Man, a twenty-seven track two-disc set, in several sessions over the past two years. The list of players that backed Black on the compilation contains a good amount of star power as well as talent including Levon Helm from the Band, Tom Petersson from Cheap Trick, Buddy Miller, and Marty Brown. The album was released this past June. 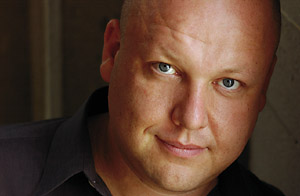 In a recent press release Black speaks of the album which was produced by Jon Tiven. "But I would never do anything as hokey as to tie the title of this album to me, even though I worked on all these tracks in fast, intense bursts with the fastest guys and gals out there. And I've been able to raid all kinds of mojos in rock and country that I'd never been able to dip into before because I didn't have the credentials. But now I feel like I can record with anybody because I know the guy at the door who can get us in."

Putting together a touring band to take on the road with him was the next challenge, but Black rose to the occasion. It will be that touring band behind him when he performs "Johnny Barleycorn" from Fast Man Raider Man on Conan Friday night. The band consists of Duane Jarvis on guitar, Eric Drew Feldman on bass, and Billy Block on drums, with special guest Jack Kidney on sax.

Late Night with Conan O'Brian airs Monday through Friday on the NBC network at 12:35 AM Eastern. Frank Black & Co. is currently on a major tour of the U.S. promoting Fast Man Raider Man. Remaining tour dates are as follows: