We were sad last year when our excellent friends Jim and Carolyn Hercik and their two boys Ben and Danny left our area and moved to Gallatin, Tennessee, about 24 miles northeast of Nashville; but happy that Jim was excited about his new job. 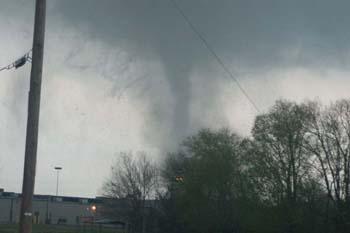 And hey, the weather would be better than Northeast Ohio, right?

The weather had been swell until last Friday when tornadoes struck Middle Tennessee killing 12, causing over $68 million in property damage to more than 1,000 homes, businesses, and farms in Gallatin’s Sumner County alone, the Herciks’ home among the victims. 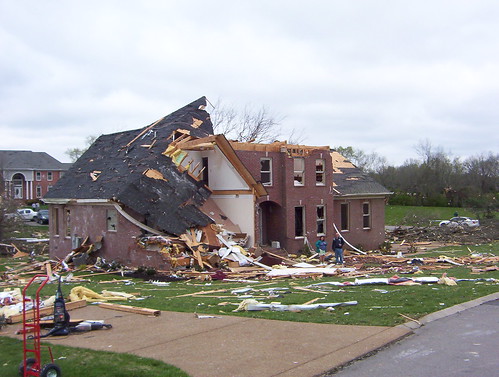 Carolyn wrote to friends and family a few days later:

Friday morning… The boys went to school and I went to the grocery store, went out planted some flower seeds and had lunch and got on the computer, emailed some people and checked the weather. The service said that the storms would pass below Nashville so I was sending a letter to Mom saying we would be fine, then I heard the train sound, looked out the window and saw 2×4’s circling about 100 yards up in the air along with other debris, so I went down the stairs and turned the corner and it hit the house, the dog was there on the floor at the bottom of the stairs and I just ducked and covered him and myself as best I could — there was no time to think about it.

I got hit with something on the back of my head and I have a pretty nasty black and blue mark on my right shoulder and a lot of cuts and abrasions from flying glass. It was over in seconds or so it seemed and it became very quiet, eerie almost.

The boys were still at school and I could not get to them until about 5:30. Our clocks had stopped at 2:24 p.m.

Jim was in California on business and I went to the neighbors and we called him on their cell because I could not go in the house because of the gas leaks. The GFD finally shut off the gas and I went in to get clothes for us, and one of Jim’s co-workers showed up around 4:30 and got me out. The van’s windows had imploded and my car was covered with sheetrock and debris and the company car had the back window blown out. So we got the boys and went to Tom’s house three counties over. And that was Friday.

Jim got home early Saturday morning and we went to the house to salvage stuff. We pulled out the computer and some other electronics and garage stuff, more clothes and baby pictures and got my car out — it still works but will need a complete check, a paint job to get rid of all the nicks, and the vinyl top has a few small cuts in it.

Sunday… We took the boys to see the house today, so they could try to understand and internalize things, they took it pretty well — what good boys I have. We got most of the clothes today and most of the boys’ collectibles and toys, then the building department came and said they could see the house visibly shifting and we can no longer go in to get things, so we have our clothes and kitchen things and some other odds and ends, no furniture to speak of, most of it is broken anyway.

But we are all alive and we have each other. We have the most important things and some really powerful guardian angels… Love, Carolyn

That rather vividly puts a distinctly human face on another in a seemingly endless string of natural and man-made disasters in the news, which I generally, in my self-absorption, tune out. Stunned but grateful it wasn’t worse, I asked Carolyn if I could quote her letter.

Hey Eric,
It was awful but we are going to be ok. Feel free to print the letter in total and add my name as well. I lost a lot of stuff but, I lost almost all of my Stephen King books and quite a bit of my Alice Cooper stuff … I know it’s only stuff and I can get new, but it hurts to see it all over the yard and blowing down the street. But I am still breathing and I have my children so I am very grateful. Carolyn

Carolyn is among the world’s most enduring and fervent Alice Cooper fans.

I know that feeling of seeing your stuff violated, no longer yours. There was a fire in my high-rise dorm 20 years ago when I was in college — my room was gutted and my earthly possessions, including a couple thousand records, were reduced to a stinking gloppy pile of ashy muck, shoveled unceremoniously out the window onto a planter area below by defeated firemen.

For days that glob of my former stuff, my life’s accumulated possessions, just sat there freeze-drying in the cold winter sun.

About a week later, as I walked to class about a half-mile away, a strong bitter wind blew an object right into my face. I swore. The offending item was a caricature of the leering face of Groucho Marx on cardboard, the edges charred. With a jolt I realized it was from an album cover, one of MY album covers. I still have it; it still gives off a faint acrid whiff of smoke.

We are very sad this disaster befell our friends, their home and possessions, but very relieved and grateful it wasn’t worse. People very nearby — like Crystal Graves, 39, who was sucked from the closet of her Gallatin home where she had taken refuge against the storm and deposited lifeless more than 100 yards away — weren’t so lucky.