As of today, gypsyman is history, and I will be taking over the writing of this space. 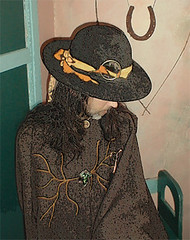 Anonymity has always been the biggest attraction of the Internet. Everyone, from pedophiles to politicians and movie stars, have taken advantage of the opportunities provided by being faceless and unidentifiable.

You can participate in conversations about yourself or send out trial balloons about new policies without ever having to commit to anything. Unfortunately, it has also allowed predators to find easy pickings by assuming an innocent guise to trap unwary victims.

For most of us who use the Internet, our aliases have been a chance to play again. To dress ourselves in the clothes of a pretend character and assume characteristics that are amusing to us and others. It’s akin to playing a giant role-playing game where the only adventures we participate in are the ones for which we can invent the rules as we go along.

There’s an incredible amount of freedom obtained from wearing a mask. When nobody can see your face, they aren’t going to judge you by your appearance, only by what thoughts you’re willing to reveal. We all wear masks most days of the week anyway, whether we know it or not.

There’s who we are at work, whether working, or hanging out of the water cooler with our co-workers, or the way in which we are with our superiors. We slip in and out of masks so many times in a day from necessity that it shouldn’t be any surprise that the first thing we do when signing up on the Internet is create a new one. 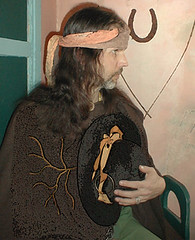 How many sites ask you to create an identity? When I first started playing around on the Internet back in 2000 — I came to computer stuff late — I would create a new identity for each site that asked for it. Of course, that meant trying to keep track of who I was on which site.

After a year or two of this, I eventually calmed down and began to settle on one persona and one persona only. The first name to pop into my head that stuck and felt appropriate was gypsyman. Aside form the romantic (notice the root word of romantic is very similar to the name that gypsies have for themselves “Roma”) connotations I had a few other reasons for finding that name attractive.

My mother’s family name, which I’ve adopted, is Marcus. Marcus is a name of Romanian Jewish descent. What’s interesting about the name is that when I was doing some research on it, before I took it for my last name, I discovered there was a good chance it was a Sephardic Jewish name.

Sephardic Jews are those people who lived in Spain during the time of its occupation by the Moorish empire. While most of the rest of Europe was making life absolutely miserable for Jews, the Moors of Spain allowed them to live in peace and with full freedom to practice their beliefs. They had to pay an additional tax for the privilege, but that was far less onerous than the continual threat of death that their brethren in the rest of Europe lived under.

But all good things seem to come an end when you’re talking about Jewish history, and eventually the Christian armies began the re-conquest of Spain. In some cities, Jewish people and gypsies managed to flee together and set up shelters in the caves surrounding the cities.

[ADBLOCKHERE]My mother and I like to think that her family was one of those that continued east from the caves, retreating with the Moorish empire, until they came to Romania. Perhaps they were tired of running by then, or through their new friends they were able to blend in with the gypsies until thing began to settle down.

Taking the name gypsyman as a nom de plume was my way of offering up remembrance to those brave folk who sang and danced in the caves of Catalonia in defiance of death and torture at the hands of the Inquisition. Who knows for sure if any of them made it to Romania or even survived to get out of Spain?

I had another, more metaphysical reason, for selecting gypsyman as my nom de plume for the Internet. I have had to do a lot of internal wandering over the years, dealing with post traumatic stress syndrome brought on by being sexually abused as a child.

I have wandered the paths of oblivion that were offered by drug and alcohol abuse. Then I had to find my way back out of that fog into clarity. Those were fairly easy compared to the task of wandering through the darker parts of my memory banks. Finding my way through a maze of self-loathing created out of memories of mistreatment by friends and loved ones took all of the path-finding skills that I had at my disposal.

But as the years have passed I’ve been discovering more and more about myself, and, with help from my wife and some good doctors, I’ve started to discover parts of myself that I actually like. Once that happened, I realized it was only a matter of time until it I would put the old guy out to pasture. 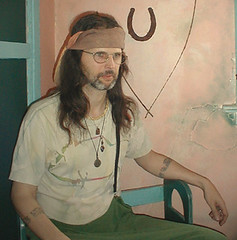 I’m going to have to get used to it anyway, because sooner or later, I’m going to be published and those books will have been written by me, not gypsyman. In fact gypsyman really doesn’t do very much except hang out and look mysterious anyway. I’m the one who’s done all the hard slogging to improve my writing, and he’s just been along for the ride trying to pick up chicks.

All right, that’s an exaggeration, but the truth of the matter is that he’s been getting all the recognition while I’ve done all the work. I’m beginning to feel like a ghostwriter for myself. As of today, that’s history; gypsyman is history, and I will be taking over the writing of this space. So if I may take a second of your time and introduce myself, I will let you return to your regularly scheduled programming.

My name is Richard Marcus; I’m 45 years old and live in Ontario, Canada. I’m married and have four cats and no children and am on a disability pension. There, that should be plenty of personal detail for you to be getting on with for now. Don’t worry we’ll be seeing a lot more of each other from now on.