Why might these societies, living in what we might think of as an idyllic world, have chosen to create such fearsome deities?

Exhibition Review: Power & Taboo – Sacred Objects from the Pacific at the British Museum

What is religion for? Should you happen to believe in the real existence of some deity or another that question answers itself, but if you don't, you have to wonder why such an apparently dysfunctional structure — one that consumes vast resources — has persisted in most places throughout human history.

A new exhibition at the British Museum, Power & Taboo, provokes reflections on this big question from the perspective of a society whose complex, polytheistic gods created a very different worldview from the primarily monotheistic stance that shaped the modern European world.

The exhibition covers Polynesia from 1760 to 1860, the period of early contact with an outside world from which the peoples had been largely isolated for many centuries. For the islanders their multiple gods were ever present in the world. They used tapu, from which our word taboo derives, to describe strategies for human control of these gods.

The exhibition begins with a striking, attractive image of a god who seems at first look like a Sesame Street character, wide-eyed, primary-coloured, in a caricature of a frown. But look closer, and those fine feathers that provide the colour make you think of all the small birds that died to provide them, and the sharp teeth (those of dogs') start to look more like the stuff of nightmares. 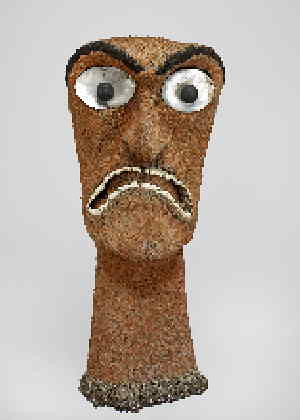 The impression is magnified further into the exhibition, with one of its greatest treasures – the emphatically swathed and bound wooden statue, some 2 metres long, that may be the Rarotongan creator god Ta'aroa. This was collected by the missionary John Williams in 1827. Such images were often wrapped and bound, their power contained by this ritual. Removing the wrapping would take away both the power and the danger – so this is the only known "god" surviving in its original form.

So what we have here are apparently terrifying, nightmare gods, high-maintenance gods who demanded a lot of work of their adherents. Why might these societies, living in what we might think of as an idyllic world of swaying palm trees and soft sea breezes, have chosen to create such deities? Some thoughts occur.

The feather gods are particularly associated with Hawaii, where the highest-ranking chiefs "owned" the fancy feathers that made up these gods, and wore cloaks and helmets (also exhibited with magnificent examples here) decorated with them. Should you be a chief wanting to maintain your power, the threat of the wrath of a powerful god might certainly come in handy in keeping your people in power, as might the claim that you were descended from their lesser descendants and relations.

Also, while much of the time this might have been an idyll, danger was not far away on small islands in the middle of a very big sea, as illustrated in this exhibition by many aspects of the technology on which the people relied. At the centre of this exhibition of technology is the impressive, but still flimsy, 15-metre canoe, the first Polynesian object acquired by British Museum.

It was collected from the Tuamotu Islands in 1767 by Captain Samuel Wallace. Since the islands had few tall trees, it is made of small sections of wood bound together by a continuous length of plaited fibre. That it came back to Europe strapped to the deck of HMS Dolphin is testimony to its robustness, but I still wouldn't care to face a tropical storm, or even a good surf beach landing, from it. Perhaps fearsome gods were needed for such fearsome dangers.

Yet life must often have been idyllic — a bit dull even — for small communities on small islands with no chance of escape. The mischievous thought occurs that a bit of excitement, the thrill of danger that we might today get from a horror movie or a scary book, was supplied here by the gods. A bit of skating close to taboos, breaking them even, provided a harmless method for youth to temporarily throw over the traces.

There's three thoughts provoked by the exhibition – questions, ideas for further thought. But there's no question about what happened next.

The first Christian mercenaries settled in Polynesia in 1797 and by the 1830s conversion was widespread. The museum commentary suggests that this was sometimes because chiefs had chosen to convert (presumably allying themselves with the new power in the region); sometimes because Christianity was associated with the new world of technology (metal fish-hooks and knives, fishing line, woven fabrics to replace the bark cloth produced at the expense of great labour); sometimes because it freed the people from constant work of managing divine power.

Whatever the cause, the gods seem, much like their predecessors in ancient Rome and ancient Scandinavia, to have died off in mere decades, surrendering very quickly to the invaders’ Christian god, who still retains great power on these islands. Why that might be, maybe these objects can help us answer.

The exhibition continues at the British Museum until January 7. Entry is free. (Image copyright British Museum, used with permission.)