Lily Silberberg's story is that of the 20th century, a story of progress from turmoil and poverty to satisfying achievement.

Lily Silberberg’s story might be that of the 20th century – the good side of the period, not its darker hue. She was born in London in 1929, to Jewish parents whose had fled Russia after the Revolution. Her father was a “journeyman tailor”, her mother an outworker spending her evenings sewing buttonholes late into the night by the light of a gas lamp.

Yet by the time Lily retired, well into her seventies, she had a full, satisfying, successful career behind her. She’d been a respected higher education lecturer, published a book, The Art of Dress Modelling, and spent the last years of her working life teaching her skills to the Bangladeshi community in Tower Hamlets.

Not bad for a girl who’d at the age of 13 had been sent by her parents – no doubt scraping hard for the fees – to the then Barrett St Technical College (now the London College of Fashion) for a two-year course “intended to take the place of an apprenticeship”. (Gentility came with an optional course in French, two hours a week.)

She’d been a star pupil, yet Lily speaks of the shock of going on to the factory floor. “The standards I’d been taught were of the highest haute courture, the standard of the Queen’s coronation robe. But there had been a war and a revolution in the garment industry. … They would shout at me in the factory: ‘Time is money.’ Can you imagine a bit of confusion?” 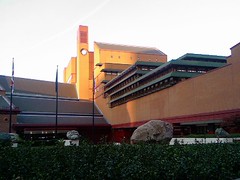 Some of her earliest efforts, tremendous labour for such small results, are on display in the British Library’s Fashion Lives exhibition. There’s a neat bunch of red roses embroidered on a handkerchief, made with, we are told, “material of a nightdress that belonged to her mother”.

But there’s a lot more to the exhibition than objects, books and pictures, fabulous as some of those are. This is one of the first times I’ve seen oral history (drawing on the Library’s sound archive) put at the centre of the exhibition. So you can hear Lily (and the seven other “lives” here) speaking about her early life, her education and her career, but also one of her (adoring pupils) and an academic speaking about the Great Titchfield Street garment district (just behind the great West End shopping emporiums), where she had started her life.

The objects and the voices together help create an evocative picture of the life and times of the “eight individuals who helped define their professions in Britain”. When I heard of the exhibition I feared a parade through the usual glamorous suspects, but this is a show on the other side of fashion, the behind-the-scene characters who do all of the work while designers swan around collecting the glory.

* A display designer and mannequin maker (Michael Southgate), whose picture in drag from the Fifties certainly belies the reputation of that decade

* Percy Savage, a press officer and illustrator, who made an amazing progression from a remote Australian farm to London, sailing in 1947 “with his pet parrot Zoe”.

* John Church, born with a shoe last in his hand as a member of the royal warrant-holding Church and Co (now owned by Prada)

* Tommy Roberts, who in 1966 opened the Kleptomania boutique “the first for identikit Hippies, where they could enter as an office boy and emerge transformed”.

This is a physically small exhibition, squeezed around the back of the cafe and on the floor above it, although with the blue and white check design background you certainly can’t miss it. But it doesn’t need a lot of space, since you travel in a sound capsule through time and space.

Many people no doubt “just pop in” to the exhibition planning to stay five minutes. Yet it would be easy to still be there an hour, or two, later.

There’s more about the exhibition here. It continues until February 7.

Find more cultural news and reviews on My London Your London.