If you want to be entertained and delighted, surprised and enlightened, then this is an unmissable event.

If you want to see great art, don’t go to the Chinese exhibition at the Royal Academy in London. If, however, you want to be entertained and delighted, surprised and enlightened, then this is an unmissable event.

From the first room, with its giant portraits of the emperors of the Kangxi, Yongzheng and Qianlong reigns* and the astonishingly crafted garments that match those they are wearing, you are dazzled with brilliant colours and swamped in the astonishing detail and craftsmanship that produced these lovingly preserved samples of what must be largely lost arts. 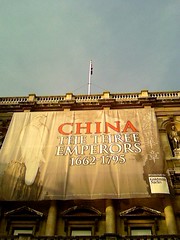 Almost everything in this extensive exhibition was made to the greater glory of these three men, or for their entertainment**. They appear again and again in different guises, sometimes as fervent Buddhists, sometimes as hunt-obsessed leaders of fierce nomads, sometimes as sober Confucian scholars. (Although the extremely formidable-looking Xiaosheng, Empress Dowager, painted in 1751 for her 60th birthday, does get an airing in this first room.)

Yet the humble, ordinary and everyday also gets a fine showing. In the second room, holding mainly immensely detailed scrolls depicting imperial processions and triumphs stretching to tens of metres, close study is repaid with delightful detail. Sure there are armies of monotonous soldiers and envoys, but in, for example, the Pearls of Chinese and Foreign Combination, amidst the great parade of tribute-bringers is a dog straining to sniff the robe of a cowering dignitary, as its handler tugs desperately on its lead. Amidst another procession, a street sweeper leaps out to clear away horse-droppings, which must not mar the emperor’s progress, while a couple of weary horse drink from a trough, which is being refilled from the neighbourhood well.

Some of the scrolls here, and more in the following rooms, are the work of the Jesuit artist Giueseppe Castiglione (known also by the Chinese name Lang Shining). They’re a fascinating blend of West and East – the style usually the former, the mental framework the latter. So The Qianlong Emperor and the Royal Children on New Year’s Eve at first glance is a delightful image of children in a family group. One boy covers an ear as he is about to light a firework, while another sneaks up behind him to strike him with a branch. But the caption explains a lot more is going on here. One son, Yonglian, is shown holding a halberd and seal, a subtle sign that he has been (secretly) chosen to be the next emperor.

It is a fascinating painting, but in artistic terms, no more than a workmanlike one. And that’s true of pretty well everything here. Technically, the craftsmanship cannot be faulted. Pearls, painted in the early 18th century, must look as fresh today as when it was painted. And in the bronze casting of the bells in this room, the carving of the thrones, the glazing of the porcelain the quality of work is astonishing. But the vision, the emotional and theoretical framework, is in a completely different, lesser class to what came before in Chinese history.

The spirit has been frozen, debased, the addition of often the worst of European art only helping the slide. The altar vessels here, in potentially stunning “moon-white” porcelain, are often in classic shapes, but fiddled around with in a way that entirely destroys their purity of line. A perfect sphere of a lid is topped by a ridiculous fiddly twisted cord of clay; a pleasing rounded rectangle has oddly pointless wings protruding from its top.

In the next room is the pièce de résistance of this trend. It was made in Britain, by the clockmaker James Cox, but obviously pleasing to the Chinese market. A gold crane carries a pavilion decorated with coloured glass on its back. The pavilion contains a clock. The crane twists its neck in an anatomically impossible way, the pavilion makes no sense at all – the whole is a garish mish-mash. This is art for worst of the nouveau riche – it would fit perfectly on the set of Footballers’ Wives.

Yet this was a society hungry for knowledge. The Synthesis of Illustrations and Books Past and Present a mammoth project echoing the French Encyclopedistes but promoted by Kangxi emperor, was truly royal in scale. There were about 5,000 volumes – voluminously illustrated with woodcuts and printed with copper type that must have been a printer’s nightmare. The project tried to unite the knowledge being brought by the Jesuits with traditional learning. Nearby are the collection of beautiful dark-wood geometric blocks that the Jesuits used to teach the emperor some of their geometric knowledge.

Yet in the next room is the sign of the end of this so potentially fruitful meeting of east and west. It is a letter written in Chinese, Manchu and Latin, issued by the Imperial Printing Office in 31 October 1716. Signed by the Jesuits, it records the conflict that occurred when the Pope refused them permission to accommodate their practices to the Chinese tradition of ancestor worship. It is one of the fascinating exercises of speculative history to imagine what might have happened had this relationship not broken down; had China continued to remain open to the knowledge and advances of the Western world.

After this in the exhibition come some of the finest porcelains, commissioned by the Qianlong emperor. Yet they are copies of ancient styles. One, a simple Ru-type basin of exquisite form sits on a base. In the original this would have been wood – here is porcelain shaped with astonishing craftsmanship to look exactly like wood. This might be a symbol of what has gone wrong here in Chinese culture – the stultifying look back to the past, the pointless attempt to copy its ethos.

It is striking that the artistically finest works in this exhibition are contained in one room, Number 10, containing works described as those of “the literati” – the closest thing to dissidents to be found in Qing China. These are mostly in monochrome – in contrast to the gleaming gold laid on with a trowel elsewhere. Gong Xian, from the former Ming capital of Nanjing, presents an ominous, brooding world in Streams and Mountain Without End. Here are heavy, dark, precipitous mountains dotted with temples, houses and endless steps winding among them. But there is not a single human figure in this complete world. It might be John Wyndham’s post-Triffid earth. Then there’s Hua Tan’s Squirrels Competing for Chestnuts, surely allegorical, showing the lithe little beasts contorted, desperate and fierce. They seem to be unaware that they are on a fragile tree clinging, just, to the edge of a steep cliff-face.

But the Manchu emperors could not acknowledge such works, could not re-incorporate them into the Chinese mainstream. So the visitor leaves the exhibition with a clearer understanding as to just why the great Chinese nation was in such a terrible state at the end of the 19th-century, as the dynasty that these men made so great was coming to its end.

The exhibition continues until 17 April.

Find more reviews and news on My London Your London, a personal, cultural guide to making the most of visiting, or living in, the city.

* The emperors are known usually by these titles, rather than their personal names.
** The items are drawn primarily from the Palace Museum in Beijing. (British diplomats must have been making the Chinese very happy, the cynic in me suggests.)