Win two tickets to "Shake it Up" with the New Cars.

Share
A lot has changed since the Cars last toured 17 years ago, but what remains the same is the music. The New Cars, which features original members Elliot Easton and Greg Hawkes have joined up with Todd Rundgren, Kasim Sulton, and Prairie Prince to revive the music on a new album, It's Alive, and a new tour. To celebrate, Blogcritics is proud give away two tickets to any concert on the tour to two lucky winners, and autographed CDs to two more.

It's Alive features live performance of the band's greatest hits as well as new songs. Some of the classics included on the album are "Just What I Needed," "You Might Think," and "Shake it Up." Easton commented on the old music and the new sound in a recent press release, “This is The New Cars. We’ll play people's favorites, but eventually, we’ll introduce new songs that will stand on their own merit. Go from strength to strength."
And a new single, shown in Youtube video below, "Not Tonight," is an example how the new music stays true to the old sound.

The second leg of the tour kicks off November 2 and continues until the end of the year. Enter to win two tickets to the show of your choice from the list below by sending an email to [email protected] with the subject line "The New Cars" between now and October 14. Emails must contain name, address, email address, and phone number to be considered. Two grand prize winners will each win two tickets to a show of their choice. Two first place winners will win autographed CDs. Winners will be notified after October 14 by email and in the comment section below. 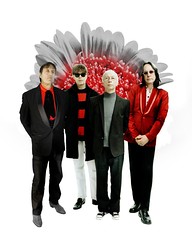 Two comedies at Anthem Film Festival took on woke and cancel culture. 'Doing Good' and 'Melons' make you laugh and think about people.