BC Music is proud to join with Warner Brothers records to give three lucky readers a chance to win a copy of The Essential Paul Simon CD/DVD set, recently presented the first Library of Congress Gershwin Prize and released June 26.

The Essential Paul Simon is a two-disc, 36 song set compilation encompassing Simon's forty plus year career and also comes in a deluxe addition which contains a DVD. (It is the deluxe edition being offered in this giveaway.) The DVD contains six music videos as well as clips from Saturday Night Live (performances and appearances), and an appearance on the Dick Cavett Show. 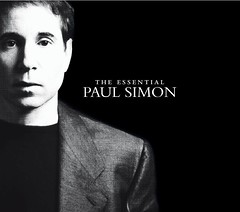 In his forty year career, Paul Simon has been honored over and over again including 12 Grammy Awards and inductions into The Songwriters Hall of Fame and the Rock n' Roll Hall of Fame. "Mrs. Robinson," his song from the movie The Graduate, was included in the top ten of The American Film Institute's 100 Years 100 Songs, and his album Graceland received The Kennedy Center Honors in 2003 and was added to the National Archives.

First, watch the video embedded of Paul Simon's song, "Me & Julio" below, and make note of the five music and sports celebrities in his video. Then, carefully follow the directions below.