Two prize packages consisting of a personalized signed photo, tour t-shirt, and guitar pick each will be given away.

As Pat Benatar and Neil Giraldo prepare to launch the final leg of their Polyamnesia – Off the Rock tour, BC Magazine is proud to give two lucky readers the chance to win a prize package consisting of a personalized signed photo, a tour t-shirt, and a guitar pick.

Benatar, along with husband, producer, and long-time collaborator Neil Giraldo, has had a long lustrous career in rock and has four Grammys to prove it. An undeniable powerhouse and mainstay in the genre, they have produced seven platinum albums, three gold albums, and 15 top-40 singles, many of which you can expect to hear if you attend an upcoming show. 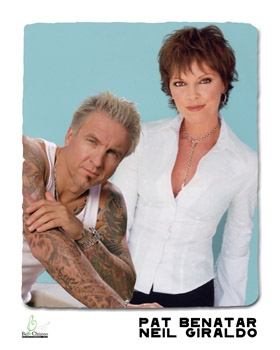 An artist who also took advantage of the evolution of videos and MTV in the 80s, Benatar has a successful and interesting collection of videos to her songs. "You Better Run" helped initiate the music video channel, as the second one aired. Her WWII-themed "Shadows of the Night" featured actors Judge Reinhold and Bill Paxton before they were famous. Maybe her best known video, "Love is a Battlefield" was paid homage to in the recent 13 Going on 30 and can be viewed at the bottom of this article.

If the last leg of the tour swings by you, make sure you get out to see Pat Benatar and Neil Giraldo, and keep reading for directions on how to enter to win a personalized prize package.

Video for Love Is A Battlefield