"When the alarm has sounded DON'T .... Be surprised at anything that may happen."

England 1939: Before and After

H.V. Morton’s I Saw Two Englands, covers two trips across the country before and after the outbreak of war. Although much of it is more or less hack travel writing, this is also a fascinating portrait of a country on the cusp of war, and in the early “phoney war” period.

Two of the book’s images might sum it up: 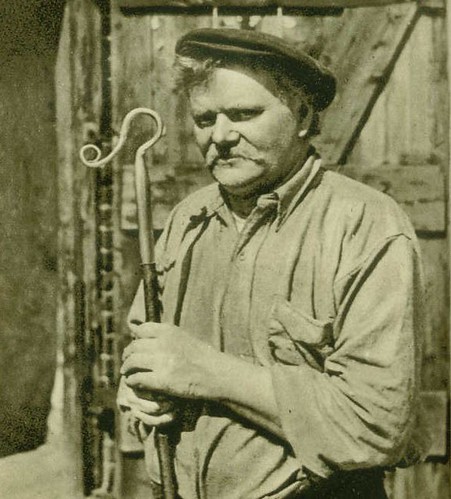 This is labelled “crookmaker of Pyecombe”. Morton laments that this is an England already almost gone&#8212indeed you might call it a pre-WWI-style relic. “The head of the crook is of iron or steel, and nothing makes a better crook than an old gun barrel. The haft of the crook must be formed of unpeeled hazel for the shepherds will not have ash. They polish the hazel until it looks like mahogany.

As the purpose of a crook is to catch a sheep by the leg, and as the various breeds of sheep in England vary in size, there are many patterns. A Sussex crook would be of no use to a Kent shepherd, and a man herding Dorset Horns would require still a difference pattern…. Pyecombe crooks last more than a lifetime, but as there are fewer shepherds than ever on the Downs, there is not much genuine demand for them today. Instead the Mitchell brothers are generally busy making crooks for bishops and hikers.” (p. 111.-112)

Yet in between his accounts of architectural and cultural relics in the first section of the book, Morton is also seeing an England waiting for war. At Fotheringham, the site of the execution of Mary Queen of Scots, Morton finds a hand-written notice on the wall of the church about what is to be done after the proclamation of a state of war: “The Church bells will not be rung or chimed during the whole period of a state of War for any ordinary or special services… In the event of an enemy air raid threatening the village, the ALARM will be sounded by two, or more, of the church bells being rung continually for two, or more, minutes. When the alarm has sounded DON’T…. Be surprised at anything that may happen.” (p. 178)

At his hotel the next morning Morton meets an historian who says: “I gave up reading the papers last September and feel better for it in every way… there are not sufficient facts available these days on which anyone could base an opinion, therefore I feel I miss nothing.” (p. 179)

He also writes about class in a distinctly looking-down-the-nose way that must still have been acceptable in 1939, but that by the end of the war would, I suspect, have sounded a bit much. So in Fittleworth, Sussex, in the Swan, he has what he says is the only interesting conversation he has ever had with a bar maid. “The girl told me that she had been getting up at six o’clock for the past few mornings in order to photograph a family of foxes living on Fittleworth Common… no one, except perhaps Thomas Hardy, could have imagined a barmaid in the bracken, watching for little foxes.” (p. 113) 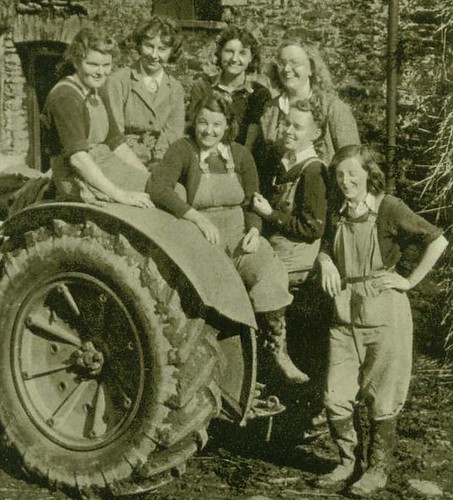 This of course is the post-outbreak photo, of members of the Women’s Land Army (“land girls”) being trained at an agricultural college. “As we were walking round, a shapeless female figure in voluminous garments passed across the weeping landscape… ‘She used to be a fashion artist,’ said the Principal. Another figure in corduroy breeches clumped past with a spade across her shoulder. ‘She was a typist,’ said the Principal. ‘No, I’m wrong, a ladies’ hairdresser.'” (p. 276) While he’s there a group of evacuated London schoolboys come past on a tour and express astonishment about where their food comes from.

The overall image is of a country is a state of slightly bemused dislocation, waiting for the bombs to fall, and in the meantime being disproportionately shocked by minor changes to their lives. “In the public-house between Frome and Bath… the tap room was full of the usual country characters, all talking about the War and listening to the B.B.C. news bulletin. Until the War the names of B.B.C. announcers had never been divulged, but as soon as War was declared, these gentlemen owned the best-known names in England. At first the phrase “and this is Frank Phillips reading it” was as startling and extraordinary as if The Times leaders had been signed.” (p. 214)

The postscript of the book has Morton as a member of the Home Guard (“Dad’s Army”&#8212and this sounds like that) leading his platoon in a search for downed German airmen. “Harry and George clumb upon a mound of hay and prod about in it; and I am reminded of some story, read long ago, of Roundheads searching for Cavaliers…. Danger gas skipped us for a century or two; and now we are back in Danger, with a gun under the bed and an ear cocked for the sound of a signal” (p.285-7)

I said a lot of this is hack travel writing, but when he wants to, he really can write. Two examples:

He’s even got a personal society.

One more interesting snippet as my postcript.

“The verb to canter is, of course, a contraction of a ‘Canterbury gallop’, which was the easy hand gallop into which the pilgrims urged their horses, possibly when they came to level stretches of the South Downs.”(p. 69)

(My edition is Metheun and Co London, 1942, I’d imagine the original, produced to the “Book Production War Economy Standard” – it is a hardback, but the paper’s very cheap-looking.)