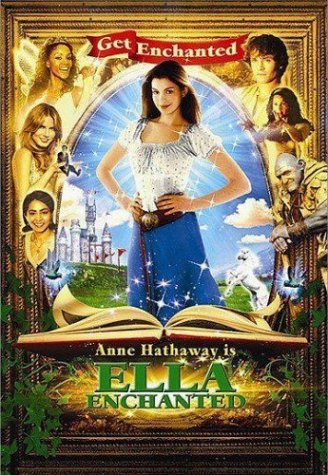 Ella Enchanted, the new family film starring Anne Hathoway (The Princess Diaries), is getting a favorable response from many reviewers, although so far it has just cracked the top 10 at the box office, doing $13.7 in its first two weeks.

Dave Kehr wrote this in the NY Times:

One of the smartest films for older children in quite some time, Tommy O’Haver’s “Ella Enchanted” is a funny (and at times, politically pointed) take-off on the ancient conventions of fairy tales. Anne Hathaway, the vivacious young star of “The Princess Diaries,” plays the title character, a put-upon teenager in a storybook world whose widowed father (Patrick Bergin) has injudiciously married Dame Olga (Joanna Lumley, of “Absolutely Fabulous”), the mother of all wicked stepmothers. She comes complete with a pair of entertainingly hateful daughters (Lucy Punch and Jennifer Higham), who like nothing better than torturing Ella — particularly once they discover that, thanks to a questionable gift bestowed by a fairy (Vivica A. Fox), she is unable to refuse any order she is given. As Ella sets out to find the errant fairy and convince her to revoke her dubious present, the screenwriters Laurie Craig, Karen McCullah Lutz and Kirsten Smith (working from a novel by Gail Carson Levine) take her through various effects-filled realms, including a land where elves are forced by the evil regent to sing, dance and be relentlessly merry, and a forced labor compound for giants that looks disturbingly like a concentration camp.

Hathaway, who was a breath of fresh air in the 2001 sleeper hit The Princess Diaries, solidifies her reputation as a natural comedienne in Ella Enchanted. The sassy, forward-thinking medieval lass, forced to obey every command despite herself, gets into some precarious situations (watch how her nasty stepsisters make her steal stuff from the medieval mall, “Galleria of Frell”), and Hathaway’s endearing qualities–the expressive face, the affinity for physical comedy–accentuate the charming story. As her love interest, Prince Charmont, Dancy (Black Hawk Down) clicks with Hathaway and has the looks and personality Teen Beat readers (or, as the magazine’s called in the film, Medieval Teen) drool over. But it’s the rest of the cast who truly complete the film–including Minnie Driver as Ella’s fairy nursemaid, Mandy, who isn’t very good at dispensing magic; Mistry (The Guru), as Benny, the boyfriend Mandy accidentally turns into a talking book; Elwes, who does a complete turnaround from his hero in Princess Bride; Lumley (Absolutely Fabulous) as the greedy stepmother; Heidi Klum (yes, the model), as a fetching giant; and especially newcomer McArdle, who, as an elf supposedly destined to only make merry and sing songs, really wants to be a lawyer.

“Ella Enchanted” is enchanted, all right. Based on the beloved novel by Gail Carson Levine, it’s a high-spirited charmer, a fantasy that sparkles with delights. A lot of the fun is generated because it takes place in a world that is one part “Cinderella,” one part “Shrek,” and one part “The Princess Bride.” It even stars the hero from “Princess Bride,” Cary Elwes, who has grown up to become evil Prince Regent Edgar, who killed his brother the king and now has his sights on the king’s son, who will inherit the throne. So make that one part “Hamlet” crossed with one part “Macbeth.”

….One of the charms of the movie is its goofiness, which extends to the songs, which verge on sing-along chestnuts; what else would the elves sing, after all, but “Let Us Entertain You”?

And Anne Hathaway is, well, kind of luminous. She has that big smile and open face, and here she’s working with a witty and wicked plot, instead of with the wheezy contrivances of “The Princess Diaries.” She looks like she’s having fun. So does everyone, even the snake. This is the best family film so far this year. [Chicago Sun-Times]

The very entertaining trailer is here and the offical site is here.