What are they doing to the incredible, edible egg?

Evidently, the CBS marketing group does too, as yesterday the eye network announced plans – amid a flurry of eggcentric and eggscremental puns – to eggvertise its fall lineup on about 35 million eggs sold to consumers in September and October. 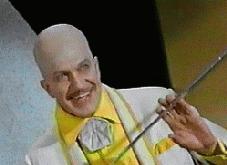 Yes, on eggs: the kind that somehow (I don't really know the science) pop out of chickens, are collected, inspected, washed, graded, cartoned, shipped, and displayed – before you buy them and take them home to boil, fry, scramble, beat, or otherwise transmogrify the white and yellow organic goo within their brave but vulnerable shells into foodstuffs.

Over 50 billion a year are sold in the U.S., according to EggFusion ("promoting freshness with every impression"), the Deerfield, Illinois company committing this eggistential indignity upon the oval fowl spawn. And, strategically, 91% of egg buyers inspect eggs for breakage prior to purchase. Once purchased, consumers will also likely view the egg again as they transfer them from the carton to the refrigerator, and, of course, when they prepare it.

That's a lot of egg ogling. 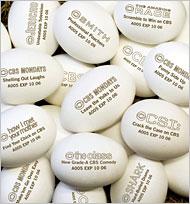 Etched to a depth of 50 to 90 micrometers, a mere 5% of the shell's thickness, EggFusion's sophisticated lasers will imprint the following upon designated chicken pods: CSI (“Crack the Case on CBS”); The Amazing Race (“Scramble to Win on CBS”); Shark (“Hard-Boiled Drama”); The Class ("New Grade-A CBS Comedy"); and for its Monday night comedy lineup of comedy – “Shelling Out Laughs,” “Funny Side Up,” “Leave the Yolks to Us.”

George Schweitzer, president of the CBS marketing group, told the New York Times he was hoping this eggstravaganza would to generate some laughter in American kitchens. “We’ve gone through every possible sad takeoff on shelling and scrambling and frying,” he said, adding, “It’s a great way to reach people in an unexpected form.”

Get 'em where they least eggspect it, eh?

Eggvertising is a sidelight thus far for EggFusion, whose raison d'etre is to imprint the expiration date directly on an egg during the washing and grading process to ensure freshness and prevent egg-repackaging fraud, which is, quite rightly, illegal.

This fall we will see whom the yolk's on.

“At this point it’s too early to tell,” said Schweitzer of CBS. “I think it’s like you know good ideas when you see them.”

Or not. Will egg consumers tell CBS to "eat it"?