A team of astonomers announced the discovery of the most “Earth-like” planet yet found outside the solar system, revolving around a star named Gliese 876, just around the interstellar corner, 15 light years away in the direction of the constellation Aquarius. About seven-and-a-half times as massive as Earth, with about twice the radius, it may be the first rocky planet ever found orbiting a normal star not much different from our Sun. 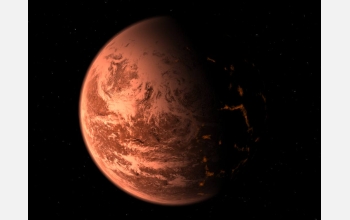 “We keep pushing the limits of what we can detect, and we’re getting closer and closer to finding Earths,” said team member Steven Vogt, a professor of astronomy and astrophysics at the University of California, Santa Cruz.

The 150 other extra-solar planets that have been discovered to date have been larger than Uranus, the remote “ice-giant” planet in our own solar system that is about 15 times the mass of the Earth.

“But there’s this huge range of sizes and distances that we haven’t seen yet, and with the upgrades at Keck, this team is probably going to find a large number of them,” Kevin L. Luhman of the Harvard-Smithsonian Center for Astrophysics told the Washington Post. “They’re going to have to go back and do the same stars all over again. But I bet they won’t mind that.”

Gliese 876 — a small, red star known as an M dwarf, the most common type of star in the galaxy — is also obited by two larger, Jupiter-size planets. The new planet whips around the star in a mere two days and is so close to the star’s surface that its daytime temperature probably tops 400 to 750 degrees Fahrenheit, temperatures far too hot for life as we know it.

The astronomer’s ability to detect the tiny wobble the planet induces in the star gives them confidence that they will be able to detect even smaller rocky planets in orbits more hospitable to life.

“This is the smallest extrasolar planet yet detected and the first of a new class of rocky terrestrial planets,” said team member Paul Butler of the Carnegie Institution of Washington. “It’s like Earth’s bigger cousin.”

“This planet answers an ancient question,” said team leader Geoffrey Marcy, professor of astronomy at the University of California, Berkeley. “Over 2,000 years ago, the Greek philosophers Aristotle and Epicurus argued about whether there were other Earth-like planets. Now, for the first time, we have evidence for a rocky planet around a ‘normal’ star,” he said. Three other purported rocky planets have been reported outside the solar system, but they orbit a pulsar, the flashing corpse of an exploded star.

“Today’s results are an important step toward answering one of the most profound questions that mankind can ask: Are we alone in the universe?” said Michael Turner, head of the Mathematical and Physical Sciences directorate at the National Science Foundation (NSF), which provided partial funding for the research.

The team’s work, conducted at the Keck Observatory in Hawaii, was also supported by the National Aeronautics and Space Administration (NASA), the University of California and the Carnegie Institution of Washington.

More information on the discovery here.