This batch continues the story started in season one, and takes things to a new level. 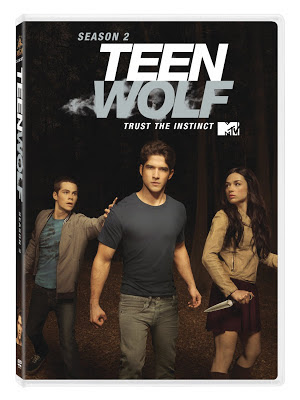 MTV’s Teen Wolf Season Two, available now on DVD, is a three disc-set that features all twelve episodes of the series that aired last summer. This batch continues the story started in season one, and takes things to a new level, with new, more sinister dangers and fresh additions to the mythology.

Each series has its own way of approaching what werewolves are and how they work, but a generally accepted part of the conceit is that when a person is bitten by a werewolf, they turn into one. Teen Wolf challenges that notion this year as Jackson (Colton Haynes) gets bitten, but does not turn. How? Why? What does this mean?

I like that Teen Wolf makes this kind of bold move, surprising characters and viewers alike. The reasoning behind Jackson’s apparent immunity is not immediately apparent, and has everyone trying to figure out what’s going on. Jackson is affected, but not in the way we expect him to be. Among the various monster types, I’m not sure something like this has really been attempted before, so I praise such an original idea.

Jackson’s resistance presents a problem for Derek (Tyler Hoechlin), who is now an Alpha. He is supposed to be able to lead his pack and tell them what is going on, but this not something he knows anything about. Luckily, there are others that are more susceptible to what Derek offers, newcomer Isaac (Daniel Sharman, Immortals), for one, which means that Derek isn’t without followers. But Jackson does present a challenge to his position, both in theory and in what soon becomes a very real way.

Of course, Scott (Tyler Posey) can’t just fall in line behind Derek. He is the star of Teen Wolf, and isn’t one to cower in a shadow. Scott and Derek may work together sometimes, but that doesn’t mean that Scott will just accept Derek’s actions when he doesn’t agree with them, whether Scott is in his pack or not. This creates some fresh conflict between the two, which is quite interesting.

Posey, while not the strongest performer on television, is growing into the role. Others do a little better than the show’s lead, but his acting is improving as his goes, and he does present a character viewers will root for. Given more time, he will likely continue to get better as the show progresses.

This being an MTV show, most of which are geared towards a certain age bracket, there is also a focus on the romance. Scott continues to see Allison (Crystal Reed), in secret, of course, since she is part of a family of wolf hunters. This does feel very much like the classic Romeo and Juliet tale of the warring families, despite the fact that not all of Allison’s relations are evil, which makes their relationship exciting to the young folks, but also prevents stability. While not completely original, the actors fill the roles well, making for good television.

The other love at the center of this year’s story line is the one between Stiles (Dylan O’Brien) and Lydia (Holland Roden). Sadly, unlike with Scott and Allison, this attraction seems to be one-sided, with Lydia not interested in Stiles’ advances. But the mental breakdowns Lydia suffers and the secrets surrounding her provide plenty of fodder to keep viewers, and Stiles, engaged, even if they aren’t really a couple.

It would actually be quite difficult to give a full summary of this second season in a few hundred words. Teen Wolf packs an incredibly amount of story into each of these episodes, and boasts an ever-expanding cast. In season two, things really ramp up, with the pacing taking off, and the plot flowing along. I liked season one, but I think the second year is when the show really begins to demonstrate what it is about and what it can do. It’s definitely one of the best things to come out of MTV, a sort of cable version of The Vampire Diaries.

And, as one might expect, there is plenty of cliffhanger at the end of Teen Wolf Season Two. However, fear not. The popular series will return this summer with all new installments to continue the saga.

Teen Wolf Season Two has an adequate amount of special features, though skews anything technical or deep in favor of those targeted at their main viewership. There’s a “Shirtless Montage,” alternate Stiles takes, a gag reel, a reel featuring fight scenes, and an introduction to Derek’s pack. There are also audio commentaries on three episodes, a look at season three, and highlights from the series panel at Paleyfest. Nothing groundbreaking here, but enough.