It's time once again to set sail with Jack, Will, Elizabeth, and Davy Jones.

Have you gone to a restaurant for the first time, sat down at the table not expecting terribly much, only to be delightfully surprised by how wonderful the entire meal was? Have you then ever gone back to that restaurant and sat down expecting another truly incredible meal, only to be moderately disappointed by its semi-wonderfulness?

Well, that’s kind of how I feel about Pirates of the Caribbean 2: Dead Man’s Chest. It’s a lot of fun, but it’s overly long and doesn’t quite have the bounce or humor of the first film. To be sure, Johnny Depp is still wonderful as Jack Sparrow, Keira Knightley plays Elizabeth Swann with just enough bite and anger combined with a softer side, and Orlando Bloom is just as upwardly righteous as Will Turner as in the last movie.

The movie picks up a little after the original left off. Will and Elizabeth’s wedding day has arrived, but it is immediately put on the back burner as Lord Beckett of the East India Trading Company threatens to execute them for aiding Jack Sparrow (Beckett, of course, is not doing this for the good of the world, he has nefarious purposes of his own). Will agrees to go track down Jack in exchange for clemency. 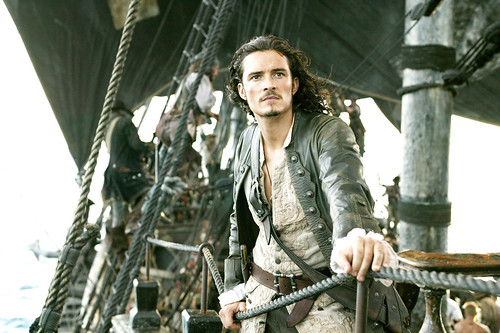 Jack, naturally, has problems of his own.  Jack had made a deal with Davy Jones years ago which allowed him to captain the Black Pearl in exchange for which Jack would serve as a member of Jones’s crew for 100 years or face the fearsome kraken. Jack’s time, however, is up and Davy Jones wants him as a crew member on his ship, the Flying Dutchman. Jack is able to trade Will Turner and the promise of other crew members in exchange for his own life.

From here the movie begins to progress in interesting, fun, and not entirely unforeseen ways. Without giving too much away, Will Turner meets and gets to learn about his father, Elizabeth has moments where she falls for Jack, and Jack finds himself, repeatedly, battling for his life. 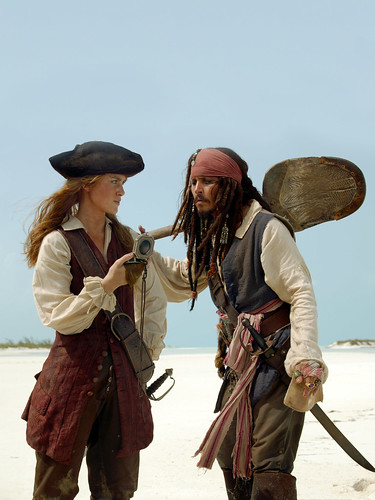 More often than not, the movie is just plain good over-the-top fun.

But, with a two and a half hour running time, the movie pushes the bounds of decency for this type of fare. What’s worse, however, is the fact that it ends without an ending. The audience sits there for two and a half hours only to get a non-ending. Granted, films like the Lord of the Rings series do the same thing, but Peter Jackson seems to manage the cliffhanger in a better fashion. For a movie where the sense of fun began to wane almost 30 minutes prior to the credit roll to finish in such a fashion feels rather pushy on the part of the filmmakers. But, the fact that the film is one of the biggest successes at the box office this year most likely means that I’m on my own feeling this way; the vast majority of the audience seems to have quite enjoyed not only the film, but the end as well (there had to have been second and third viewings for the movie to make the amount it did). 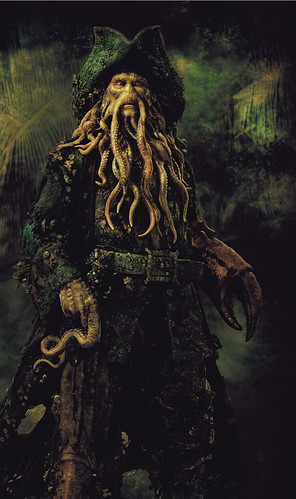 This movie is a pure popcorn film, just as the first one was. It just proves to be a lot of fun to watch. One of the reasons that a film like this works so well is that the cast seems to be having as much fun as the audience. Of particular note in this regard is the absolutely fantastic Jack Davenport as James Norrington. For people in the U.S., Davenport is most likely only known as the fiancé in The Wedding Date, but is far superior as Steve on the original Coupling. And while Davenport hasn’t made a huge splash on this side of the pond, we can only hope that he will get bigger in the future.

The two-disc special edition is loaded with tons of extras, including an audio commentary with the film’s writers and a video production diary with Jerry Bruckheimer. There are also behind the scenes videos on the creation of Jack Sparrow (wardrobe, makeup, etc.), the kraken, Davy Jones, and sword fighting.

Actually, while the number of features is somewhat less than occur on more overblown DVD sets, the ones included here are all on fascinating topics that should provide at least a modicum of interest to many viewers. After taking a look at them I highly recommend the Davy Jones one. It is an incredibly interesting look at how Davy Jones was created, from the acting to the motion capture to the CG, it’s just fantastic and really shows what goes into making a big-budget flick like this happen.

On the whole, this film may not be quite as much fun as the first installment, but there’s absolutely no reason to pass up viewing this second installment (particularly so that you can gear up to see the third).