It's back — and more Impossible than ever!

“Time does march on,” says a senior Jim Phelps (Peter Graves), upon accessing his modern late ‘80s computer system near the beginning of Mission: Impossible – The ‘88 TV Season, the revival of the iconic series that first premiered in 1966. Sure, Mr. Phelps’ computer emits that unmistakable antediluvian odor when you see it now (I can assure you it was incredibly high-tech for back then, though), but such a statement could not have been more appropriate at the time — as it had been fifteen years since the original Mission: Impossible ended its initial run on network television, and things had changed considerably since 1973. 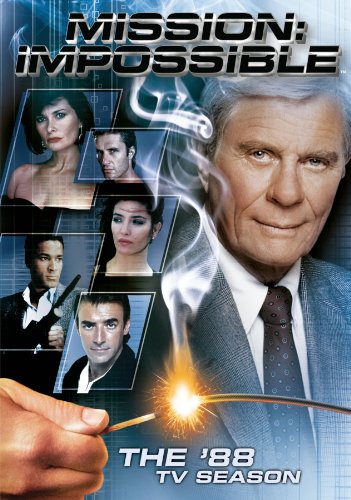 Originally, studio execs were planning on remaking Bruce Geller’s series with an all-new cast, before good ol’ Peter Graves said “Well, those folks at A&E haven’t returned my calls yet, and my damn brother of mine squeezed twenty seasons out of his show, so I’m definitely game, fellas!” And so, the suits at ABC decided to make this one a direct follow-up, and it was certainly nice to see Graves return to the role that Jon Voight would ultimately ruin less than a decade later. But he wasn’t alone: another famous character from the original series also joined the cast — the great Bob Johnson lent his unforgettable power of speech once again as the unnamed disembodied voice who gives Jim his assignments.

Still two more characters came back to say “Hello.” Lynda Day George returns to make an appearance as IMF veteran Lisa Casey, as does Greg Morris as Barney Collier, whose son, Greg (played by his real life son, Phil Morris), is cast in this show as Graves’ current tech guru, Grant. “All in the family,” you ask? Actually, the new show was created and filmed during the 1988 Writers’ Strike, which resulted in the first four filmed installments of this continuation being nothing more than remakes of earlier episodes; updated for modern times, of course. The series was filmed in Australia, allowing producers to save 20%, but it also gave international actors and filmmakers a chance to strut their stuff; one episode in this season is directed by Stunt Rock’s Brian Trenchard-Smith.

We begin the series with the murder of Phelps’ protégé at the hands of a nameless assassin (played by John de Lancie), which prompts Jim to rejoin the Impossible Missions Force, just to see his promising pupil’s killer incarcerated if nothing else. But, as it turns out, Jim still has a very good grasp on how things work, even with all the new technology — and the show hits a moment or two of “Um, what?” as it introduces some truly insipidly-inspired devices, such as a dream recorder (!) — and decides to keep his new team, consisting of master of disguise Nicolas Black (Thaao Penghils), strongman Max Harte (Anthony Hamilton), the aforementioned Grant Collier, and the token lady of the group, model-cum-agent Casey Randall (Terry Markwell).

Mission: Impossible – The ‘88 TV Season manages to break the mold a bit by actually having one of the IMF crew caught, killed, and “disavowed” by the Secretary — something Bob Johnson’s voice always allured to, but which the writers of the seven seasons that preceded it never dared to pull off. This moment causes much chaos amongst the remaining crew, including a rare moment of pure rage from Mr. Phelps, which was never really his thing, given his mellow nature. Following this tragedy, a new character — that of Shannon Reed, brought to life by none other than V’s own Jane Badler, whose beauty is always a sight for sore eyes, especially when Peter Graves is on the set (but I kid the late, great actor) — joins the cast for the remainder of the season (as well as series).

When CBS/Paramount started releasing season sets of the original Mission: Impossible several years back, fans began to wonder if the short-lived revival series would make its way to DVD or not. Fortunately, that time has come, and CBS/Paramount has given us a barebones (still) 5-disc set featuring all 19 episodes of this ‘88-’89 season (don’t worry: the second and final ‘89-’90 season is scheduled for release in early 2012). The set features Stereo sound and the original “In Stereo Where Applicable” captions pop up at the beginning of most of the episodes, which will probably stir a chuckle or two out of some of you. English (SDH) subtitles are also present here.

Yes, time does march on — and one peek at the rather dated visual quality present in Mission: Impossible – The ‘88 TV Season (which is about as good as you’d expect from the late ‘80s) will serve as a reminder of how much television has matured since then. Don’t let it dissuade you, though: this is still a delightful second coming for Peter Graves’ Jim Phelps and the IMF — and one that’s safe for you and whole family to enjoy without any fear of Jon Voight reducing the character to rubble.

Nobody has managed to recreate the secret world of spies and subterfuge with Le Carre's flair and 'Agent Running in the Field' cements his reputation as a master of the genre.