Missing In America isn't an easy film to watch, and that's what makes it such a good movie.

People get lost for many reasons and in many ways. Some get lost in drugs and alcohol to escape their pain and others quite literally get lost by hiding out from the world as hermits. Whatever the reason, it takes a lot for them to want to return to the world that hurt them, for them to come in from the wilderness, figuratively and sometimes for real.

Missing In America, just out on DVD, is a movie that deals with veterans of the Vietnam war who came back home to America and discovered they could no longer be in the world. Scarred internally and externally, they've retreated into the deep woods in the Pacific North West and carve out a life with as little contact as possible with "civilization".

Jake Neeley (Danny Glover) is one such veteran. He's never forgiven himself for the deaths of the men in his squad when he was on his tour of duty. He's lived out in the woods on his own with his dog, cat, and chickens eking out a survival existence, emotionally and physically.

All that changes when an old army buddy (David Strathairn) unceremoniously dumps his American-Asian daughter on him because he's dying of lung cancer caused by Agent Orange. Forced to come out of his shell by the demands placed on him by young Lenny (Zoe Weizenbaum), Jake rediscovers his capacity for caring again. 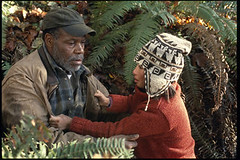 In the woods surrounding Jake live an unknown number of other veterans who have reached the same conclusion — live alone and nothing can hurt you again. The horror that was Vietnam involved the use of kids to fight against the American soldiers. One of the neighbouring vets was horribly scarred by a grenade thrown by a Vietnamese girl Lenny's age and his mind is as badly burnt by the incident as his face was.

Ron Perlman (proving he doesn't need latex and prosthetics to be scary or to act) plays "Red", a brooding presence in the woods that looms as a constant threat to Lenny's safety. Of all the veterans "Red" has the least chance of making his way home again, and is the least susceptible to Lenny's brightness of spirit.

You don't have to be a veteran of a war to be broken in spirit and Linda Hamilton's Kate, the owner of a general store that Jake buys his dry goods from, carries her own angst from a haunted past as much as any of the men, (and one woman) in the woods. Even as Lenny's presence creates a balm for the spirits of these damaged people, Red is a constant reminder of the fact some wild animals can't be tamed or even socialized.

A film like Missing In America is in constant danger of slipping over into the realm of cheap sentimentality and cliché. How many movies have there been made of the curmudgeon brought to life by the young spirited child? Three things have to work in perfect harmony for this type of movie to have any chance of success.

The Director has to be ruthless in the extermination of extraneous cuteness, the script has to stay true to the characters and their potential (not have them turn into something that wasn't there in the first place), and the acting has to be without any artifice, everything played straight and true. It is to their credit the people involved with Missing In America not only carry that off, they also breath life into the cliché so it takes on a reality its probably never had before.

You wouldn't know by watching this movie it was the first time directing a feature for Director Gabrielle Savage Dockterman. Her previous experience with documentaries may have taught her the ins and outs of being on set and how to frame a shot to its best advantage. But there's no way any of that could have helped her learn how to build a sequence of shots to best reflect the emotional impact of a moment on screen.

Not only that but she was also working with a novice child actor as one of her leads. Too many experienced Hollywood Directors have ruined movies and child actors by turning their performances into caricatures instead of characters. Their movies should come with warnings along the lines of cloying cuteness being carcinogenic. They could take lessons from Ms. Dockterman in how to work with child actors: cute sayings and spunky attitudes are not acting.

Everybody receives help from the script that was based on a story by Ken Miller, who was also part of the scriptwriting team with Ms. Dockterman and Nancy Babine. That Ken is a veteran of the Vietnam war and knows of people living in the woods the movie is set in for the same reasons that Jake and the others do, helps ensure the story's authenticity. But it wouldn't have mattered how factual they were if they hadn't crafted a story that let the situation develop in as natural a manner possible within the confines of a movie.

Naturally everything is foreshortened by the time constraints of a movie, but they've done a wonderful job in bringing the development of the relationship between the lonely man and the scared child to life. Each actor is given sufficient time to develop their characters realistically and their relationships logically.

The one aspect of the script that may seem at odds with reality, the father leaving his child with an old soldier buddy, actually gives the script an even greater air of authenticity. As civilians we don't understand the camaraderie and trust that is built up within a platoon in the field. You literally place your life in each other's hands on a daily basis. Who else in this world would you trust with a life, a life more valuable than your own, at this moment because yours is ending, then someone who had shared that responsibility in the past?

No matter how good the script, no matter how great the director, if you don't have actors who can carry out their assignments your movie is ruined. Miraculously the casting in this movie is a marvel from top to bottom. Danny Glover just keeps getting better and better as the years go by. The emotional depth and intelligence of his work gets more and more sophisticated, as he utilizes more than just his voice and facial expressions to communicate with the audience.

You can see the physical affect Lenny has on him as he gradually changes from the tightly wound, controlled person, full of self-loathing and fear we meet at the beginning of the movie one step at a time. The first confrontation with Red, at a picnic organized by Lenny to make friends with Jake's fellow hermits, triggers Jake's own memories and nearly destroys the fragile bridge that's been erected between the man and the young girl.

Zoe Weizenbaum is a neophyte actor, never having set foot in front of the cameras before this shoot. As Lenny she too must be able to show reasons for her behaviour that make sense for the situation. She's a little girl whose mother is dead and her father is dying and all of a sudden finds herself in the care of a total stranger who acts like he'd rather have a rabid skunk as a companion.

Somehow Zoe manages to be all the clichés about the plucky and good-hearted little girl who brings a smile to everyone's face and make it seem real and natural. Probably the most overused word for describing child actors or their roles is spunky, and thank goodness she's not that. Her Lenny is brave and scared in the right mixture, determined to make the best of things if possible, but also not settling for the bare minimum.

Her reactions on meeting some of the other veterans for the first time is perfect, equal parts thrilled that they've come for her picnic and nervous like any child would be when meeting new adults. She only comes out from behind the protection of Jake when she knows she will be accepted. It's an understanding of the little things that makes a person a good actor, and Zoe Weizenbaum in her performance of Lenny shows a delicacy of touch that would be the envy of many a more experienced individual.

Aside from Ron Perlman as Red and Linda Hamilton as Kate (they're not in any scenes together so no Beauty and the Beast reunion) both who give strong performances in support. David Strathairn as Lenny's father Henry is the other main supporting actor. Although he is only in the first few scenes his performance of a desperate man turning to his final resort is a finely tuned performance that sets the tone for the whole movie.

If even a hint of melodrama had been allowed to creep into his performance the movie's credibility would have been shot. Fortunately his performance is a masterful piece of understatement mixed with emotion that epitomizes the tone of restraint of all the performances throughout the movie.

The initials M.I.A. resonated with veterans of the Vietnam War probably far more than they ever had for previous wars. Missing In Action, how many American service men and women continue to be Missing In Action, their bodies never found or their remains never identified. They'd go out with their companies on patrol and simply vanish during a firefight, maybe taken prisoner, maybe dying alone in a swamp thousands of miles away from home.

I doubt it was an accident that the initials of Missing In America are the same. These men and women who still live out in the woods, or in any other place that is still inhospitable enough for them to get lost in and avoid humanity, haven't been able to come home to the families they left behind thirty years ago now. They are still Missing In Action.

I've seen only one other movie on the Vietnam War that does justice to veterans as much as this one, In Country. Missing In America isn't an easy film to watch, and that's what makes it such a good movie. If it were easy to watch it wouldn't have done its topic justice. And if there is any group of people who deserve justice it's the forgotten men and women who are Missing In America