Disney's animated tale takes a look at the future.

Time travel stories are difficult to tell.  When watching a movie that focuses on time travel, the audience is often quick to point out the multitude of story problems and paradoxes that ought to make the entire film unspool far differently than it does.  When the film in question is an animated movie put out by Disney and geared for children, as with Meet The Robinsons, the target audience is probably somewhat less demanding.  It is lucky for Disney that this is the case, as Meet the Robinsons is riddled with plot holes, paradoxes, and a multitude of ill thought through notions.  While children in the audience won't be picky about these, it does lessen the enjoyment for adults.

The movie focuses on young Lewis, an orphan who fancies himself an inventor.  Sadly for Lewis, none of his inventions work, that is, until he decides to come up with a machine that will tap into people's hippocampus in order to show trapped memories.  Just as Lewis is about to unveil this creation at his school's science fair, a strange young boy named Wilbur Robinson appears.  Wilbur warns Lewis of a sinister man in a bowler hat.  While Lewis has not encountered Bowler Hat Guy to this point, the villain does make an 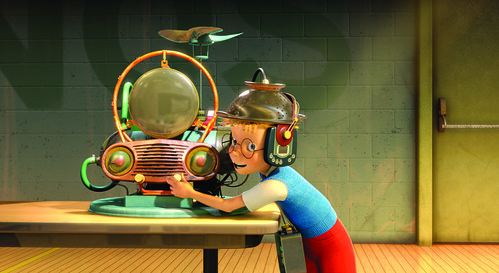 appearance just as Lewis is about to unveil his creation.

The bowler hat itself (it is a robot) breaks the memory machine just as Lewis is about to fire it up, causing enormous destruction and devastating Lewis.  Lewis opts to quit his inventing, which was the Bowler Hat Guy's goal, much to the chagrin of Wilbur Robinson.  Wilbur, as it turns out, is a boy from the future who has traveled back in time to try and stop Bowler Hat Guy from ruining Lewis's invention.

Quicker than you can say "danger Will Robinson," Lewis, Wilbur, and Bowler Hat Guy are headed to the future as Wilbur tries to stop Bowler Hat Guy and convince Lewis to continue inventing.

If one opts to not apply logic to the film, it is a children's movie after all, things are much more fun.  Director Stephen J. Anderson's (who also voices Bowler Hat Guy) vision of the future is fun and bright and cheerful.  Wilbur and his family live in a fantastic place where, even if things don't work as they should, everyone tries to "keep moving f 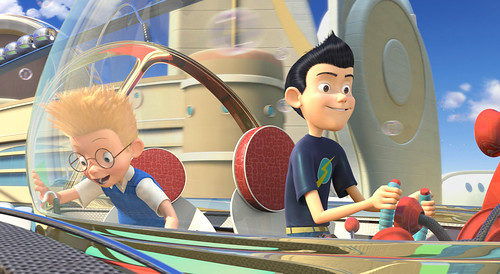 orward," which happens to be the Robinson family motto.  While the computer animation is not quite as spectacular as what emerges from Pixar, there is still plenty to look at and be impressed by.

However, even steering clear of the pitfalls of time travel, the film has one major problem – Bowler Hat Guy is unsatisfying as a villain.  The bowler hat turns out, the audience learns very early on, to be far more evil than the head on which it sits.  While this helps make the piece more palatable (the hat makes for a better bad guy than Bowler Hat Guy), it in no way makes Bowler Hat Guy appealing to watch.  He is a whiny, inane, villain and nowhere near as good as the majority of bad guys that reside in the Disney pantheon.  He is overly comedic and neither he, nor the hat, ever really put forth the necessary sense of dread or menace required even of a cartoon villain.

While Meet The Robinsons is moderately amusing, it is, at times, annoying and ends up leaving the adult audience longing for Walt Disney's golden era or, perhaps, another Pixar-helmed production.

The film does however have some wonderful moments.  The Robinson family is superbly funny and nice and despite their oddities the exact sort of people we 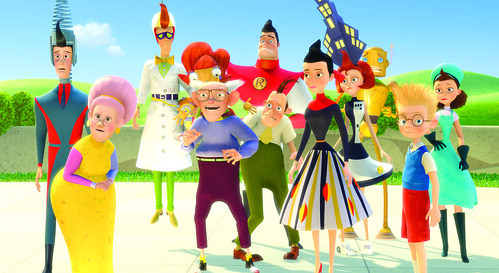 would all like to know.  There are actually numerous moments and episodes in the film that are great fun to watch, and much of the piece feels like a roller coaster rid, as a whole though, Meet the Robinsons is simply not as much fun as it ought to have been.

Lewis and Wilbur make for a great pair in the film, and are amusing on screen together.  The dynamic the two characters have with one another quickly moves from hugely suspicious and disheartened to somewhat cautious and completely curious to utterly fast friends.  The movement, though speedy, is believable and part of the charm of the movie.

The DVD release of Meet The Robinsons features deleted scenes, music videos, and a Robinson family matching game.  There is also a behind the scenes featurette and another that looks at how inventors have changed the world as well as an audio commentary by Stephen Anderson for the feature film itself.

While Meet The Robinsons has its share of funny pieces and cute moments, it lacks some of the charm and storytelling that have made the Disney name what it is today.  Children will enjoy the feature, but it will not end up alongside Disney's greatest works in anyone's imagination.