Willy DeVille may not be a soul singer, but he is the most literally full of soul singer I've ever heard.

There’s an urban legend that circulates about Willy DeVille’s choice of “Mink DeVille” as the name of his first band. The story goes that when a reporter asked him why that name in particular for his band, DeVille is said to have replied that he’d always thought the ultimate in cool would be a mink-lined Cadillac Coup de Ville.

DeVille is the type of musician whose persona makes you want that story to be true, even if it isn’t. Back in Mink DeVille’s heyday, you could visualise him tooling around Spanish Harlem in a convertible, mink-lined Coup de Ville with the top down. One hand on the steering wheel, the other tapping out a Latin beat against the side of the car that’s capturing the sounds of the barrio wafting around him: the energy, the life, and the undercurrent of ever present danger of the inevitable result of mixing drugs, poverty, and desperation.

That’s the sharp edge you hear in all his music: the subtle sounds of the street interwoven into the silky rhythms and salsa grooves. Tom Wait’s trashcan drunk persona seems to be almost a caricature of itself on occasion. Others who have strived for any sort of street authenticity (with the exception of certain rappers whose gangsta roots are never too far off stage) just look silly because you know about their mansions and their lifestyle. Even when DeVille is singing a song like “Storybook Love” (his Oscar nominated hit from the movie The Princess Bride), the whiff of danger is always there and always real. 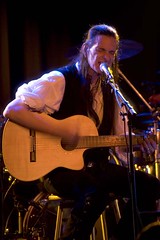 You’d have thought, given all DeVille can bring to a stage, someone would have brought out a DVD of one of his concerts by now, but Live In The Lowland, recorded in Amsterdam’s Club Paradiso, is the first ever digitalised recording of Willy. All praise for this venture must be given to the folk over at Eagle Rock Entertainment for going where no one has dared to tread before in capturing the mercurial DeVille on camera.

Perhaps it’s a good thing that there hasn’t been anything up until now, that the fates decreed the world wait until technology had advanced sufficiently to do the job properly. Anything short of the handheld minicam and impeccable sound equipment wouldn’t have been able to capture the subtleties of either the man or the music, which would have made the experience a disappointment.

There is something so highly personal about DeVille and his music that not being able to pick up the sweat on his brow and the look in his eye would have made it a waste of resources. Being able to have the cameras on stage with Willy and the band, following the interplay of music and players, makes Live In The Lowlands almost as rewarding as seeing Willy in person.

The director of the film, Perry Joseph, has done a remarkable job of editing the footage from the multiple cameras. He managed to capture not only the power of the music but also the underlying currents and character of DeVille that are so much a part of each song. Part New Orleans honky-tonk, Mississippi Blues, Spain, and just old-fashioned Rock and Roll, DeVille and his band would be lost in a static camera shoot. Sometimes you have to be in motion to capture all the activity of a band that stays relatively still.

These aren’t players that are jumping around on stage. It looks like, at the time of the concert, Willy was recovering from an accident or something because he was walking with a cane. He also seemed to have moments when he was in obvious pain. It didn’t show up in his performance. But by the encores, his face is starting to show the strain of dealing with pain. In fact, his lead guitar player Freddy Koella stayed seated for the whole show. Much more like a jazz band than a rock band in their performance style, they are more than willing to let the music speak for itself, without any physical histrionics.

Director Joseph manages to find a balance of cutting between individual players to break up the monotony of flat shooting and never getting to spend enough time with each individual. He never allows his desire to create movement become a distraction, only an enhancement.

Prior to the concert starting, you hear a voiceover of Willy talking about why he does what he does. He says that he never got into it for money, or fame, or the chicks, but for the love of performing the music. In one of the special feature interviews, Boris Kinberg, his drummer of some twenty years, says that there is no difference between Willy on stage and Willy off stage. He doesn’t leave the street or the day behind him when he comes on stage because everything affects him and, by extension, his music.

When you listen to him sing anything from his bluesy tribute to Muddy Waters, “Muddy Waters rose Out Of The Mississippi Mud”, to the very Spanish “Come A Little Bit Closer”, or the classics “Cadillac Walk” and “Savoir Faire,” you have no doubt in your mind that he’s right where he should be and doing what he is supposed to be doing. 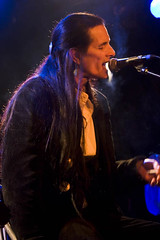 He can lift your spirits high with his lust for life, exuberance, and sense of humour. His cover of the Hendrix classic “Hey Joe” is truly inspired. But he can break your heart with the emotional truths on songs like “Crow Jane Alley” and “Cry To Me”. That’s part of DeVille’s brilliance, emotional truth. There’s nothing artificial about that voice, those eyes, or that laugh. You know he’s been to the places and felt the feelings he sings about, if not physically, at least emotionally.

As this was part of his tour to promote his 2005 release of the disc Crow Jane Alley, don’t come looking to this for a collection of only older material. Sure there are some from the days of Mink DeVille, but this is no old-artist “look at what I’ve done in the past” tour. This is a man who is not willing to stay still and stagnate in his past but wants to keep moving forward, constantly doing different material and exploring their emotional depths.

A jazz musician will take a theme and run with it for a song, improvising while he’s playing. In some ways, DeVille’s career has been like Jazz, a long series of improvisations around a theme. As it ages, it continues to expand with each individual nuance in the score that is discovered and explored.

Aside from being able to witness Willy in concert, there is a nice long interview session with Willy and the different band members that were obviously carried out at various points during the tour. The band talks about Willy and Willy talks about music. You come away with a much clearer picture of the man. Whether it’s because of a casual aside made by his bassist David J. Keyes or an observation by Kenny Margolis, who has played keyboards with him since the time of Mink DeVille, a picture of a man who lives for his music develops. But unlike so many other driven people, he doesn’t come across as a dictator. In fact, according to his backup vocalists, Sweetie and Lisa Wise, he could afford to be a little more demanding.

When I hear a comment like that, I think here’s a man who wouldn’t understand the need for that. How anyone could not understand the importance of what they were doing and not be willing to put everything they have into it, wouldn’t even be comprehendible to him.

The term soul applies to a certain genre of music. Willy DeVille may not be a soul singer, but he is the most literally full of soul singer I’ve ever heard. Live In The Lowlands is amazingly successful in capturing that essence. If you love the work of Willy DeVille, you will regret not owning this DVD.