He doesn't just play the music of the past: he blows the dust of history off it so that it sounds fresh, alive, and relevant.

I had the brilliant idea of taking my laptop out to the living room to work on this review while watching the John Hammond: The Paris Concert DVD. The only problem was trying to drag myself away from watching long enough to write anything down. It's hard enough for one man, a guitar, and a harmonica to hold an audience live, but to be able to enthrall you through an entire DVD is the sign of someone special.

That's John Hammond (the younger one, his dad being dead now for quite a while) all right, someone special, and the new DVD John Hammond: The Paris Concert captures everything amazing about him. Normally, you're lucky if these concert films utilize four cameras for a full band, but that's how many they have trained on John for this filming at the New Morning club in Paris. 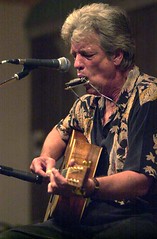 repetitive – let's face it, in the hands of a lesser musician, that can happen – but with Mr. Hammond, that's not the case. First of all, he throws in songs you're not expecting, like Tom Waits' "Get Behind The Mule".

When you finally get used to the fact he's pretty near unmatchable while playing acoustic guitar blues, he picks up his Resonator guitar and demonstrates that you haven't seen anything yet. Most slide players tend to equate speed and flash with substance, but not Mr. Hammond. He stretches notes with that round bar of metal (he uses a piece from a sprocket set) like he's playing them on one of his harmonicas.

That doesn't mean he can't uncork a slide run that makes you wonder how he doesn't burn the neck off his guitar, he's playing so hard. "Mother In Law Blues" has him running the slide from the bridge up to the head of the neck so fast that you swear you see sparks spraying off the strings.

With his strings howling, his harp crying, and his voice growling, you begin to understand how the blues has come to have so many myths about the devil at the Crossroads attached to it. You either have to be speaking in tongues in ecstasy during church or possessed by the devil. Since no good Christian is going to be singing about those types of things mentioned in blues songs – whisky, women, and wild ways – well, that leaves only one reasonable conclusion.

John Hammond is a living compendium of the best blues music sung, written, and performed since the beginning of the 20th century. From Robert Johnson, Howling Wolf, Muddy Waters, on up to the blues of the early Rolling Stones, John Hammond: The Paris Concert is a journey through music history.

From the Piedmont style of the Carolinas by artists like Blind Boy Fuller, with its roots in the Appalachians and country blues, that was popular during the thirties, to the Mississippi Delta, and across the breadth of the United States on up to the streets of Chicago, Mr. Hammond can play the blues in all its variants, shapes, and forms. But it's not just the music he knows – the stories he has to tell about the people he's played with and met along the road are equally fascinating.

Introducing a Howling Wolf song, he recounts his first meeting with the great artist who was one of his biggest influences. Mr. Hammond had just finished his set on a bill that included Howling Wolf. He had shown up early hoping to meet his idol during the sound check, but Howling Wolf hadn't shown by the time John had to perform. 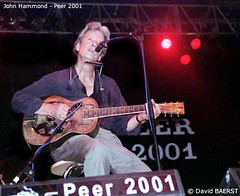 He got backstage after he finished and there, standing in front of him, was Howling Wolf. The first words out of Howling Wolf's mouth were, "Where did you learn to play like that?" Hammond responded, "from records." Howling Wolf looked at him for a second and said, "So did I." He then sat Hammond down and talked about those writers who influenced him and how he learned to sing and play.

When your father is the man who produced Billie Holiday, "discovered" Bob Dylan, and worked with most of the great blues, folk, and jazz musicians of his time, you either can go the opposite direction into something like accounting, or do your best to make people forget there are two John Hammonds in the music business who are related. Of course, there are advantages to be found in such a relationship, like being able to listen to all that great music at home and absorb it like a sponge.

But it takes a person with a lot of strength of character to go out and perform on stage with a famous name, playing the music that his father produced. To do it with as much heart and respect as Mr. Hammond is able to imbue in his interpretations is a truly amazing accomplishment.

John Hammond: The Paris Concert is a DVD that matches the accomplishments of the man with its capture of his performance. If, like me, you've never had the experience of seeing him perform before, this production will be a revelation. John Hammond is a bridge that connects our world with the magical world of the acoustic blues he grew up in.

Included along with the concert is an interview with Hammond in which he talks about how he got started and his early career. What becomes clear from this short little piece of tape is just how much the music means to him. At one point, he says he used to feel compelled to explain himself to people. Now, he says, he just does what he does and if people like it great, if not, well there are enough people out there who do that it doesn't really matter.

What matters is that he loves what he does and it comes through in every song he plays. With only two guitars, a collection of harmonicas, and his voice, he doesn't just play the music of the past, he takes it off the shelf and blows the dust of history off so that it sounds as fresh, alive, and relevant as when it was first recorded. That takes love.