Viewers gain an understanding of the emotions and principles that guided the Founding Fathers in their grave and brave experiment in government.

I am not a history buff by nature. Oh sure, put me in front of a classy costume drama — kings, queens, ruthless villains, ladies in gorgeous costumes and (of course) the obligatory hero — and you’ve got me. The excellent HBO miniseries John Adams has some of these attributes, and perhaps most of them, but usually those great historical costume dramas do not send me flocking to the bookstore in quest of American revolutionary history.  Surprisingly, this one did.

Based on David McCullough’s Pulitzer-Prize winning biography of John Adams (which received huge bump in sales after the seven-part miniseries aired on HBO this spring), and produced by Tom Hanks, John Adams humanizes the larger-than-life historical figures who created a nation and changed the world, and it does it with style, charm, and splendid energy.

Directed by Emmy Award-winning Tom Hooper (Elizabeth I), John Adams stars Paul Giamatti (The Illusionist, Sideways) and Laura Linney (Breach, Love Actually) as John and Abigail Adams. The series spans the time from the late Colonial days and the Revolution through Adams’ death during the Presidency of his son John Quincy Adams.

The story is as much about family as it is about history and the birth of a nation. The heroes of the revolution are matched by the heroism of Abigail, who holds her family together during Adams’ long absences, and serves as a calming and wise advisor to her husband. Theirs is a marriage of equals during a time when women were considered as much property as slaves. (Adams did not own slaves and found the practice abhorrent.) 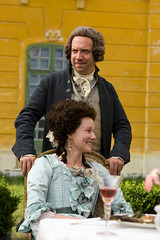 John Adams also explores the deep and complex relationship between Adams and Thomas Jefferson, who were both friends and political rivals. Their political and ideological differences eventually estranged them until the final days of their lives, when they reconnected through a mutual correspondence (ironically on July 4, 1801 – the 25th anniversary of the nation’s birth.)

Unlike many of the often-romanticized and sanitized filmed and novelized portrayals of history, the personalities and personages portrayed in John Adams sweated, got dirty and gritty, and had bad teeth, vanities, and other flaws. They fought and argued with each other for the soul of what this nation should be (and whether it should be a nation at all).

It is fascinating to watch history come alive as it does in this wonderful miniseries, but it is not simply historical fact on the screen that makes this mini-series compelling. Viewers gain an understanding of the emotions and principles that guided the Founding Fathers in their grave and brave experiment in government. These were not simply rebels or patriots. They were also intellectuals, businessmen, and farmers — often all three — who were much informed by the European Enlightenment, and who sought to create something unique. Their strongly held individual beliefs and styles often came into conflict with each other.

“The United States today should be very, very grateful that a dozen or so of the most remarkable men who ever lived anywhere came together at the same time in order to build a democracy,” remarked British actor Tom Wilkinson (Benjamin Franklin.) “What they did is just something quite remarkable. And had they not been alive, you would have had a very different history. The United States would not be what it is today.” Stephen Dillane (Thomas Jefferson) added, “There is a certain quality about some of the men that were involved here, a certain idealism that was involved in the attempt to create a new society.” 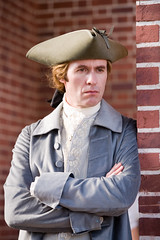 The acting is uniformly excellent and the casting simply perfection. Giamatti is a perfect choice for the “everyman” John Adams, a farmer (who is an expert in the finer points of manure) and a lawyer. He is wonderful in bringing out Adams’ passion and his flaws, his oratory, and his self-doubt. Laura Linney is equally excellent as Abigail Adams, strong and tough as she needed to be running a household and a farm during Adams’ long absences, but with gentility that comes through every speech.

Stephen Dillane (Fugitive Pieces, The Hours), a British stage and film actor is brilliant, submerging himself into the melancholy and aristocratic Thomas Jefferson. Tom Wilkinson (Michael Clayton, In the Bedroom) is perfectly cast as the brilliant and flamboyant Benjamin Franklin. David Morse (Distrubia, House, MD) is an imposing presence as the nation’s first president, George Washington.

I look into my crystal ball and see several Emmy nominations for this production, not only for the acting, but also for costuming, make-up (the aging of each principal character is meticulous and invisible), photography, musical score, and effects.

The three-DVD set, beautifully library-boxed in rich antique gold foil, contains the seven episodes and several nice extras, including the obligatory making-of featurette and a glimpse into the life and times of works of David McCullough. Of interest to history buffs (and US history students) especially is an optional on-screen historical guide, which pops up facts based upon the action and dialogue on the screen. The guide can be toggled on or off during the film, so if you are curious about the historical background of something you see onscreen, the facts are handily available.