A John Woo/Chow Yun-Fat classic comes to DVD once more.

John Woo is an undeniable master of the action movie. Unquestionably, the man has made some lesser works, but there was a period of his career in Hong Kong where turned out one mind-blowing movie after another. Arriving at the end of that time is the epic crime movie, Hard-Boiled.

This movie represents yet another collaboration between Woo and Chow Yun-Fat (they had previously worked together on the A Better Tomorrow trilogy among other places), and it has everything one would expect from a collaboration between them. The story follows Inspector Yuen (Chow Yun-Fat) as a cop on the edge as he and an undercover cop, Alan (Tony Leung), who is posing as a member of the triad, go after organized crime in Hong Kong.

It is true that this plot sounds neither new nor underused, but in the hands of John Woo, the film is a sight to behold. Woo's talent lies not with the telling of the story, but in his choreography of action sequences, and Hard-Boiled boasts some of the best around.

The film starts with a huge gunfight in a teahouse, where a member of the Triad end up killing Yuen's friend. While Yuen takes out the murderer, he becomes hell-bent on destroying the criminal bosses that employed the murderer. While loyalties and allegiances switch throughout the film, Yuen shows himself willing to defy anyone and everyone that might get in his way. 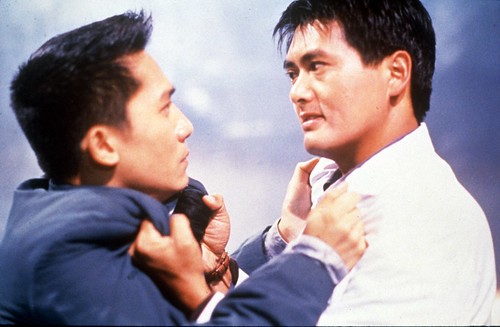 On the flip side, Leung, in his role as undercover cop, begins to lose his way. He suffers grave moments of doubt, and wonders whether he is going to end up on the right side of the law in the end. While the movie does not really doubt the character and where he will end up, Leung is more than convincing in the role.

The film is pretty short on speaking parts for women. The one notable role is that of Teresa Chang, played by Teresa Mo. She is Yueng's boss and girlfriend, and does play an important role in one of the climactic scenes. Even so, while she may be good in the role, it is neither particularly demanding, nor is Teresa a particularly strong character.

As stated above, it is not a very original plotline, but the three main action set pieces – the teahouse, a warehouse, and the hospital – are filled with explosions, deadly accurate gunplay, and even have some humor tossed in for good measure. One of the most impressive things about the film, and the genre, is the realism with which everything is filmed. There are explosions and gunplay, yes, but everything that happens appears to be completely real, there are no huge CG effects that take the viewer out of the moment. Rather, the viewer is simply awed by the fact that the actors and stuntmen are actually doing these things. 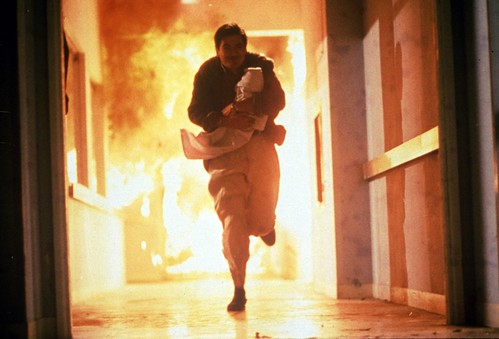 During the final scene in the hospital, there is a single, nearly three-minute long tracking shot that follows Yun-Fat and Leung as they gun down members of the Triad. The precision and accuracy required on the part of everyone involved in the shot is tremendous, and the result is outstanding.

Hard-Boiled has just been released as a two-disc "Ultimate Edition." The first disc, in addition to the film itself features an audio commentary by genre expert Bey Logan, and the second has interviews with producer Terence Chong as well as interviews with co-stars of the film and a featurette with Woo.

All in all, the film is a dizzying array of gunplay with Chow Yun-Fat somehow going after everyone with a gun in each hand and a toothpick in his mouth. For fans of action movies, Hard-Boiled should not be missed.