Futurama scores a successful return from the dead with Bender's Big Score.

Futurama hit the airwaves on Fox back in the tender year of 1999 as the brainchild of Matt Groening and David X Cohen. The show centered around the pathetic Philip J. Fry, a down on his luck pizza delivery boy who is cryogenically frozen for 1000 years when delivering a pizza on New Year's Eve 2000. When he awakes he is thrust into the reality that he is alive and well in the year 3000.

He joins up with the delivery crew of the Planet Express company and embarks on wacky adventures for the next five seasons (really four and a half). The show was a cult hit based on its cutting edge humour and situations but Fox never saw it as a commercial hit and shuffled it around the schedule and split the seasons up. Ultimately the show was canceled in August of 2003.

That normally would be the end, but as we saw for other cult hits, Family Guy (renewed), Farscape (four hour mini-series to wrap up the arcs), and Firefly (a movie to resolve some story and character issues), if it sells you will make more. Sell it did, with reruns getting good ratings on Comedy Central and DVD releases of each season being very successful. At Comic-Con this year it was announced that there would be four direct-to-DVD movies and 16 new episodes based on and pulled from the movies. The first is Bender's Big Score and it marks the return of the series in a great way. 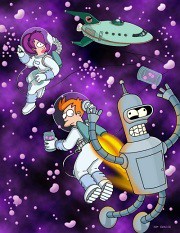 Bender's Big Score is a very complex movie dealing mainly with a time travel storyline that gets very convoluted (that fact is noted by Bender in a very funny way at one point) but at its core is a reboot story that does a lot to show each main character in depth so that casual or new viewers will not be overwhelmed.

The main crew here are:

There are many other characters, but the other main recurring ones (but not as essential as the above) are Amy Wong, the intern, Dr. Zoidberg, the physician, Nibbler, the Nibblonian, Hermes Conrad, the office administrator, and the favorites, Zapp Brannigan, the completely incompetent yet revered space commander, and his associate Kif.  All make great appearances, especially Hermes.

The movie opens with very quick and pointed references to the crew being canceled from flying by the Box network, but since the idiots at the Box network have been fired and horribly killed, the Planet Express crew are back on the air — flying through it they mean, of course. It was a great opening and set a lighthearted and mocking tone that carried through the film.

The gist of the film revolves around a group of naked scammer aliens that manage to take over Planet Express and then discover a time-traveling code on Fry's rear end (how it gets there is explained much later in the film). They then use the code to send Bender (hence the title) back in time to steal all of history's treasures. Over the course of the very complicated and essentially impossible plot, we see a time-traveling Fry pining over Leela, Leela meeting a new man, Hermes having marriage problems, Bender causing all kinds of trouble, and the spammer aliens taking everyone's money (including the planet Earth).

It is a purely entertaining movie that, aside from a couple of minor missteps (painful song and dance mid-way through and some jokes that fall flat), really shows the world how funny Futurama can be. Watching this at times I am reminded how TV can really run the gamut from great to truly mind-numbingly awful. Futurama was one of those great shows. While Bender's Big Score doesn't quite hit that greatness at all levels, it is able to rekindle that fire and deliver a truly enjoyable experience.

Ahh, widescreen goodness… About 20 minutes in I realized that the movie was being displayed in 16:9 widescreen (a first for Futurama) and it held up on my widescreen display fairly well. The colors were a little soft, but despite the models collecting dust for a couple of years, all of the characters were perfectly represented. There were some minor transition issues in certain scenes, but nothing that took away form the movie and they were literal blips. The animation was solid and had very few timing issues, but there was some artifacting present. This could have been a better transfer; apparently this was produced in HD and we can hope FOX will redeem itself by releasing an HD version of this. Seeing Futurama in widescreen as crisp as can be would be very nice. The transfer quality is one of the few weak spots in this movie, not enough to make it bad by any stretch, but enough to make you notice.

Another first for Futurama is the Dolby 5.1 audio implementation. While there was not a lot of advanced audio outputs to take advantage of it, the atmospheric noises and voice locations were represented well in my setup. The voice acting, as always, was top notch with Billy West, John DiMaggio, Katy Sagal and all the others doing a great job and showing their obvious passion for the roles they play. Overall the audio was good, not stellar, but serviceable, the score seemed limited but the Futurama theme was represented in a number of different ways in a useful and enjoyable fashion.

FOX and the crew did very well with this crop of watchable extras; they range from the standard (commentary) to the surreal ("Everyone Loves Hypnotoad"), but in all they are appreciated and hopefully this will be the pattern for the remaining movies:

While not perfect, Bender's Big Score is a very well done reboot for the series and is a great way to bring the crew back to viewers' perceptions. There are many laugh-out-loud moments here and a smile was on my face while watching. The large amount of extras was appreciated and adds substantially to this disc.