An outstanding update and send-up of all that is Disney.

Spoofing one's self is always a dangerous proposition. If you don't poke quite enough fun at yourself you will be seen as soft; poke too much at yourself and you risk destroying all your previous work. Magically, wonderfully, Disney managed to get the balance just right in one of their latest releases, Enchanted.

Directed by Kevin Lima (Tarzan), the film stars Amy Adams as Giselle, a cartoon woman from a fairy tale, who, naturally, is destined to marry a prince (James Marsden). The prince's wicked stepmother, Queen Narissa (Susan Sarandon), fearing loss of control of the kingdom, sends Giselle to the real world. 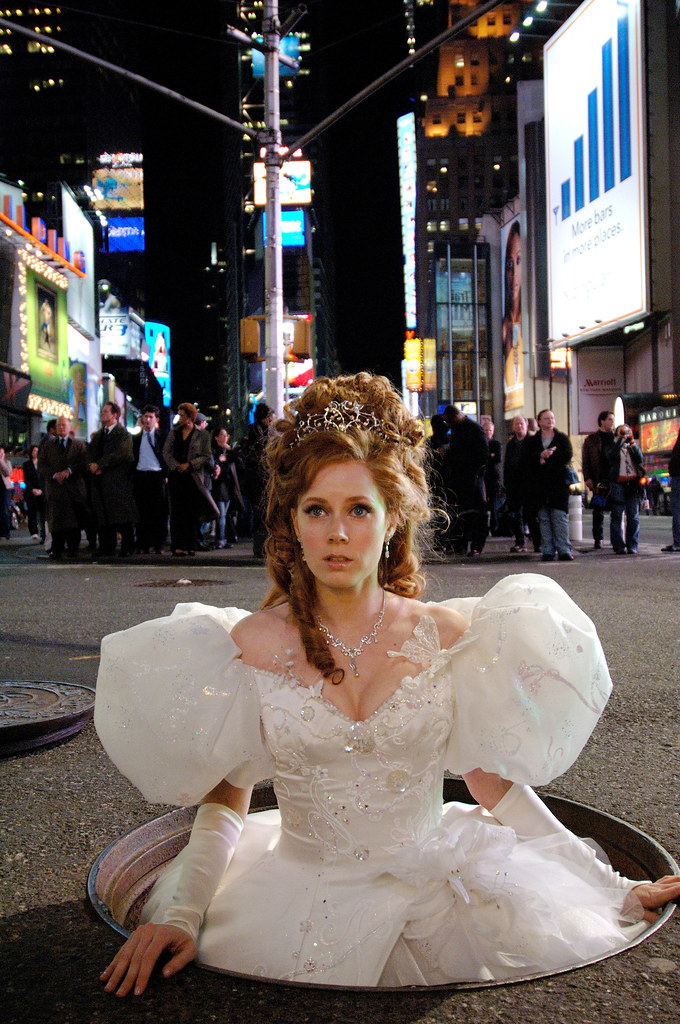 After some misadventures in New York, Giselle is found by Robert (Patrick Dempsey) and his daughter, Morgan (Rachel Covey). Reluctantly, Robert takes Giselle in and tries to help her find her way in the wiles of New York City. At the same time that Giselle learns about this new land, she tries to explain to Robert and Morgan they way things are where she comes from. The more the two explain of their various worlds, the more the other grows confused.

For his part, Prince Edward heads to New York and attempts to find and rescue Giselle. By the time he does find her, she isn't quite sure she wants to leave anymore; she likes this new world and Robert. At the end, of course, everyone finds a way to live happily ever after (save the wicked stepmother).

Enchanted is huge, fun, Disney-style fairy tale making, which manages to spoof itself and the fairy tale tropes Disney films helped create. The film works on both an ironic and straightforward level, providing amusement for many age groups.

Unquestionably, a large part of why the film works so well is Adams herself. She is tasked with the immensely difficult job of portraying an over-the-top, syrupy-sweet Disney fairy tale princess, yet her ignorance of the real world and ever-present bliss has to be endearing instead of sickening. With her wide-eyed stare and huge smile, it is a task that Adams is more than up to. She is charming and witty, and even after she learns to love the real world, manages to maintain a fairy tale sheen.

The film also contains three prominent musical numbers (all three songs were nominated for Academy Awards this past year). Even within these songs, the film manages to both find humor in subverting classic Disney moments and notions while never truly refuting them. This is best seen in the generically titled, "Happy Working Song." 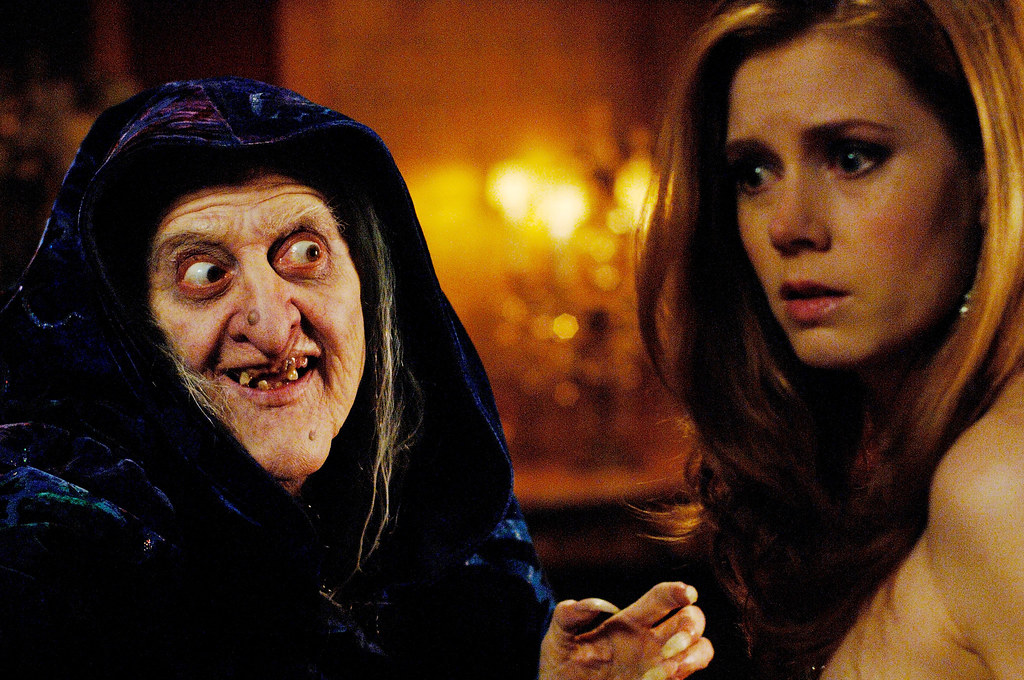 The number that accompanies this song features Giselle in Robert's New York City apartment getting the various animals of New York to help her clean. From mice and birds to cockroaches, every creature does their part. The lyrics feature the various animals doing their bits to clean the apartment as Adams sings such wonderful verses as "And you’ll trill a cheery tune in the tub / As we scrub a stubborn mildew stain / Lug a hairball from the shower drain / To the gay refrain / Of a happy working song." In just one brief song, the film manages to recall numerous Disney pictures, not-so-subtly mock them, and yet reinforce the very notions and ideals behind them.

The special features on the DVD include less-than-stellar bloopers, deleted scenes (Lima explaining exactly why the scenes were not included in the film), three brief behind-the-scenes looks at the musical numbers, and a game featuring the film's requisite animal companion, a chipmunk named Pip. 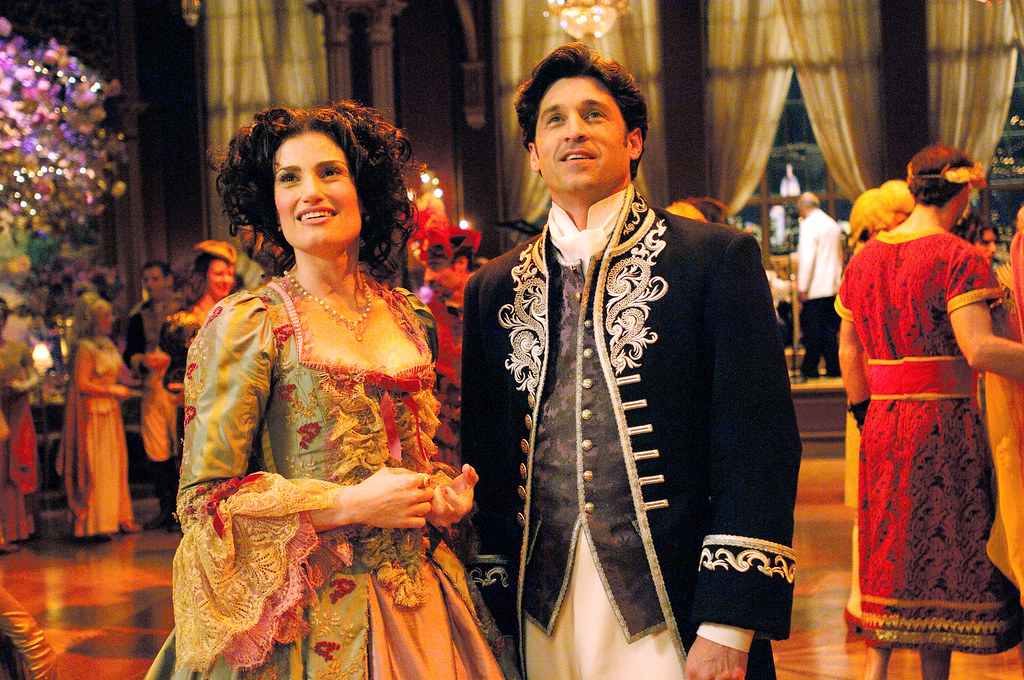 With an outstanding supporting cast (including Idina Menzel as Robert's girlfriend and Timothy Spall as the wicked stepmother's henchman), Enchanted is great fun for all but the youngest of viewers (there is a dragon present in the film). There are numerous overt and subtle references to past Disney works, which become more identifiable with repeat viewing, and a sharp eye (and ear) will have much to look out for. The biggest disappointment in the film is that Menzel, who has a spectacular voice, is never given the chance to use it. However, that is a minor complaint, and anyone who has ever enjoyed a Disney movie will find something to like in Enchanted. It is a fun family film well worth seeing.