Doctor Who once more encounters his more iconic foes in a story of revenge and mind control.

DVD Review: Doctor Who Resurrection of the Daleks Special Edition

JeromeWetzelTV June 25, 2012 Comments Off on DVD Review: Doctor Who Resurrection of the Daleks Special Edition 310 Views 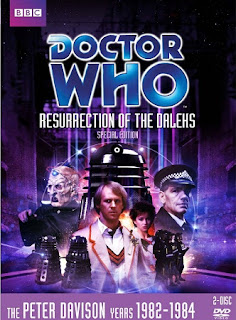 Resurrection of the Daleks is serial four of Doctor Who’s 21st season. Intended to be four half-hour episodes, but aired as two full-hour installments because of the 1984 Olympics, the tale begins with The Doctor (Peter Davison), Tegan (Janet Fielding), and Turlough (Mark Strickson) dragged through a time corridor to London circa the present day (present for when the episode aired). There they encounter old enemies, the Daleks, who have come for their creator, Davros (Terry Molloy), hoping he can save them from a deadly disease..

As the Doctor battles the Daleks, Davros isn’t exactly looking forward to being rescued by his foe, wanting his revenge on the Doctor for having him cryogenically frozen these past 90 years, apparently a very boring experience. That’s OK, though, as the Doctor isn’t exactly eager to be the savior of this mad man, either.

The Daleks go after the Doctor too, but with their own motivations. They plan to clone him and his companions, then using the clones to assassinate the High Council of Time Lords. This is made easier by mind control technology, which is not fool proof, but does make for some suspense, causing us to wonder who might not be acting on their own accord at any given time.

Things get even more complicated when Davros raises his own Dalek army, which has opposing orders to the Supreme Dalek’s troops. Who is in command? Where do the loyalties of the Daleks lie? Does everyone wish the Doctor dead? 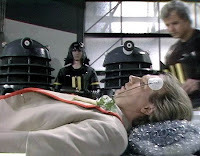 In the end, the showdown is spectacular and violent, more so than almost any other Doctor Who. And (spoiler) one of the Doctor’s companions, horrified by the destruction witnessed, decides to give up the game for good.

Resurrection of the Daleks balances multiple revenge stories. Getting even is a human instinct anyone can relate to, but when taken too far, is one of the ugliest sides mankind can exhibit. Revenge never ends well for anyone involved, as it can spur a person to ignore everything else in a single-minded blind rage, being just as self-destructive as he or she is successful at hurting the enemy. Seeing so much darkness in this episode is thrilling, but it’s a good thing that Doctor Who doesn’t go down this path too often. To do so would create a completely different show.

The need for revenge probably contributes mightily to why the Doctor loses a companion at the end of the story. Even one as enlightened as a Time Lord can succumb to such base instincts, and this is demonstrated in part by his rare use of a gun in the episode, a weapon that the Doctor generally avoids. It may not be pretty, but it’s this fallibility that makes the character so well written. 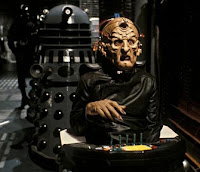 The Daleks are being threatened by a deadly virus in this serial. Is genocide justifiable when exercised against a nefarious villain? Can one ever really feel good about slaying an entire species? The answer is no. Even as fans root against the Doctor’s enemies, they need to remember the high cost of taking lives, especially a race created by a scientist out of unwilling beings. After all, the Daleks are self aware, and many are just following orders. Even if the only way to save lives is to slaughter them, there should be no joy taken in such an act.

Another interesting issue raised in Resurrection of the Daleks is that those who have had their minds controlled remember those forced activities. It’s incredibly sad to see Stien (Rodney Bewes), in particular, who is not prepared to live with what he recalls doing. Even though its not his fault, he is party to some serious atrocities, and it is not in most people’s nature to let themselves off the hook completely, even when they are not really at fault. This only adds to the tragedy of the hours.

On a side note, some have complained about the unexplained absence of Kamelion (Gerald Flood). As many viewers will be viewing Resurrection of the Daleks as a stand alone story, this will not make much difference. But for those who follow the show’s continuity, the lapse is regrettable and certainly an error on the part of the creative team.

Resurrection of the Daleks Special Edition has one of the largest collections of Extras seen in a Doctor Who release yet! It probably goes without saying that the usual PDF materials and photo galleries are included. There are seven minutes of extended and deleted scenes. This time around, the audio commentary is provided by Molloy, writer Eric Saward, and Peter Wragg, a visual effects designer, moderated by Nicholas Pegg. A second commentary features Davison, Fielding, and Matthew Robinson, the director. Viewers are also given the option to watch the serial in two parts, as originally aired, or four. 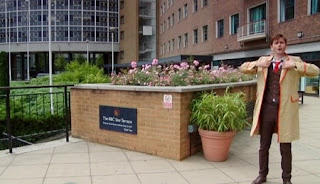 There are plenty of featurettes, including 32 minutes devoted to actor interviews. Eight minutes of “Breakfast Time” with Janet Fielding and John Nathan-Turner are included. “On Location” runs for eighteen minutes. There are several others, but the crown jewel has to be the nearly hour long “Come in Number Five.” In it, David Tennant, who plays the 10th Doctor, hosts a retrospective about Peter Davison, covering his time on Doctor Who, as well as why he left the series. It’s a loving tribute from one doctor to another, and incredibly insightful.

Doctor Who Resurrection of the Daleks Special Edition is available now.

Directed and written by Mark Gatiss, 'The Mezzotint' premieres on BritBox on December 24.