This show will be funny after a few pints of Romulan ale. I hope.

William Shatner has had a long career as a mediocre actor who was elevated to cult status due to his connection with Star Trek. His notoriously difficult working relationships and stilted acting style has made him one of the more common impersonation targets, as well as the butt of many jokes. Given all that, it's no surprise that Comedy Central selected him for their brand of celebrity roast.

A roast is a public event that both honors the roastee and pokes fun at them. The first incarnations of this were private events, but television eventually became a medium for disseminating the roasts. What was shown to the public was often far more tame and prurient than what was not shown. Times have changed and what was once considered to be too crude or explicit to be shown on network TV is now standard fare for safe harbor hours and cable channels.

The Comedy Central Roast of William Shatner — Extended & Uncensored! DVD contents are not much different from what was shown on the network last year. Even some of the extras were a part of the original airing of the roast, and anyway, they do not add much to the program. It seems that what Comedy Central means by "extended" is a handful of imperceptible extra scenes, and "uncensored" means that the f-bombs are left un-bleeped. It is somewhat amusing to note that the bleeps were left in for one of the extras, the "Red Carpet Interviews." Unfortunately, that is one of the only amusing parts of that particular extra segment, as it is apparent that the interviewer, Jessi Klein, is completely drunk off her ass by the end of the program. Also, despite being the "extended" version, the opening segment with Leonard Nimoy that was shown with the original broadcast is not included on the DVD.

One of the features of a roast is that no one is safe, and every one on the dais is subject to jokes about themselves, as well as the celebrity being roasted. Some of the roasters spent more time hitting their comrades than saying much about Shatner. Given that most of the comedians on the dais had never met Shatner, one has to wonder why they were even there. The non-comedians were all people who had worked with Shatner at some point, or were requested by him specifically in the case of Farrah Fawcett. Those who had worked with Shatner were fellow actors and celebrities from Star Trek, Boston Legal, Miss Congeniality, Howard Stern, and even his Priceline commercials received some attention from Sarah Silverman and Jimmy Kimmel. 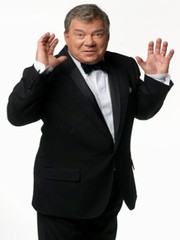 Shatner made his appearance at the roast by riding into the room and up to the stage on a large white horse. Confused viewers may not know that Shatner is an enthusiastic equestrian and even owns a horse farm in Kentucky. Once on the dais, he seemed slightly bemused and somewhat uncomfortable sitting in the old captain's chair from Star Trek, on loan from the Science Fiction Museum. He didn't noticeably laugh at any of the jokes until the third roaster, Betty White (Boston Legal) dropped this line in reference to George Takei's recent public statement about being a gay man: "Let's face it, we all know Shatner's nuts, but George has actually tasted them." It was the first of several jokes that involved Takei, and each time he took them in good humor and unabashed laughter — a sharp contrast to Shatner's mild reactions. I don't blame him, though. Most of the jokes were funny only to someone with the sense of humor of a teenage boy, and barely worth a polite laugh to save the embarrassment of the person delivering the joke.

One of the most talked-about segments of the program was Nichelle Nichols' roasting bit. She referenced the famous interracial kiss between them that made TV history on Star Trek and said that afterwards Shatner told her, "Eh… Sulu… uses… more… tongue." Her segment concluded with her waking over to Shatner and saying, "Let's make a little more TV history and… kiss my black ass." Both of them laughed and hugged, and he responded with, "If I could find it," noting her voluminous African-style dress.

George Takei's bit was another highly anticipated segment of the show. The punch lines revolved around Shatner's ego and supposed inconsideration of his colleagues, as well as innuendos related to Takei's sexuality. While he ended it with a wide smile and a hug, he spoke the lines with far more intensity and passion than seemed necessary. It left me feeling a bit like I had walked in on a serious fight between my parents.

There were a few truly funny moments, such as Sandra Bullock delivering "go easy on the old coot" with a straight face. Kimmel & Silverman's bit about being stuck in the airport on the way to the roast because they got their tickets on Priceline was also notable for its slightly more intelligent level of humor. In the end, Shatner himself summed it up with, "The only thing that hurts my feelings tonight is that you people just weren't that funny, and I gave you so much to work with!"

One would hope that the extras on the DVD would be enough to make up for the poor performance of the roast itself, but sadly, they do not. Along with the aforementioned drunken red carpet interviews, the bonus material includes a highly edited and inane "Behind the Scenes" and a somewhat interesting "Making of the Roast" that consists of brief footage of meetings with Shatner. Comedy Central also thinks that including three short clips from their shows (The Colbert Report, Drawn Together, and Reno 911) and trailers for other DVDs counts for bonus material. I consider them to be advertising taking up space that could have included more roast-related content.

In summary, the program was not very funny the first time around, and it has not improved with the transfer to DVD. Unless you are a big fan of low-brow humor or simply must have anything that features Shatner, you are probably safe giving this one a pass. Anyone expecting witty jokes will be disappointed, as they are few and far between in this show.