Audrey Hepburn and Cary Grant in a classic comedy thriller.

A train is hurtling through the French countryside. Suddenly a body is thrown from one of the cars. Cut to a close up of a man’s bloody head. This, even before the opening credits, is the beginning of Stanley Donen’s 1963 classic fusion of romance, comedy and thriller, Charade currently re-released on DVD as part of the celebration of Universal Studios’ 100th anniversary.

The film features an adorable Audrey Hepburn in a winning performance as the proverbial damsel in distress. She is being pursued by a trio of villains that think she’s in possession of a fortune her murdered husband had stolen from them. A debonair Cary Grant plays the handsome stranger who shows up out of nowhere; he may be out to help her; he may be just another villain looking for the fortune.

Sometimes called “the best Hitchcock movie Hitchcock never made,” Charade is filled with surprises. From the very beginning, when a threatening pistol turns out to be a water gun, to the very ending when final revelations are made, viewers can never be certain they know what is going on, who are the good guys, and who the bad. All in all it keeps you guessing and makes for truly enjoyable viewing. 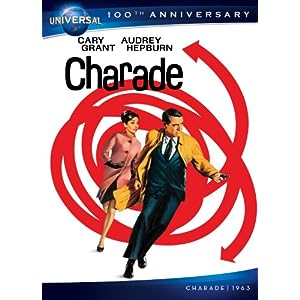 Joining Hepburn and Grant are George Kennedy, James Coburn and Ned Glass as the villainous trio. Glass, an old vaudeville performer, is perhaps an odd choice, although he does add a broad comic touch. Kennedy and Coburn are more appropriately threatening. Walter Matthau plays a government bureaucrat who provides much of the background explanation about the stolen fortune.

If Grant pushing sixty at the time of the shooting seems a bit old for Hepburn who was in her 30s but could easily have passed for a 20-something, he has the kind of suave sophistication than enables him to pull it off. Indeed, the scriptwriter is even willing to directly call attention to the difference in ages. A note on the DVD package indicates that Grant was uncomfortable with the romantic relationship, and the script was rewritten to have Hepburn pursuing him before he agreed to take the part. On the other hand, the idea of the elegant Grant jumping from hotel balcony to hotel balcony and tussling on a rooftop with a “Captain Hook handed” George Kennedy may be a little more difficult to swallow. Still, no one can top him when it comes to deft comic banter.

Bonus material on the DVD includes the film’s trailer and two short documentary features on the history of Universal Studios: “100 Years of Universal: The Carl Laemmle Era” and “100 Years of Universal: The Lew Wasserman Era.” Purchasers are also offered the opportunity to download digital copies of the film that can be played on a variety of portable devices. The download is available until December 31, 2013. Finally purchasers can enter a contest to redeem a variety of prizes including Blu-ray players, laptops and theme park tickets, as well as a chance to win one million dollars. The contest runs through the rest of this year.

Blu-ray Review: ‘Only Angels Have Wings’ – The Criterion Collection

Howard Hawks' masterpiece makes another landing to home video. But this time, the presentation is nothing short of divine.