Amalia once said of herself, "If I sing like I sing it is because of Nature."

Richard Marcus May 24, 2006 Comments Off on DVD Review: Amalia Rodrigues: The Spirit Of Fado 204 Views

There’s a big wide mysterious world of music out there beyond the borders of North American culture, and has been for years. Recent fascination with all things world has only begun to scratch the surface of what we’ve been missing out on with our format-blinkered radio programming. I feel fairly safe in saying that outside of a few specialty radio stations, fado, the mournful music of Portugal, gets almost no airplay.

Literally translated, fado means fate or destiny and is said to have originated among the Portuguese sailors who travelled the world with the likes of Magellan and da Gama over 400 years ago. The Portuguese word saudade, which combines our feelings of longing, bittersweet nostalgia, homesickness, and all the pain and love associated with those feelings, is most probably the wellspring for the emotional depth of and passion of fado. It also strengthens the argument that the music originated with sailors a long way from home, missing their families, and living in conditions of varying degrees of deprivation.

The rather archaic-looking Portuguese guitar helps to give fado its unique sound. Strung like a mandolin, with the body of a lute, but with a tuning system that has nothing to do with the pegs we associate with any modern instrument, its range is more limited. But the sound it produces seems ideally suited to the requirements of fado and it works in tandem with the singer’s voice to enrich the melody of the song.

One can’t talk about fado in the 20th century without talking about Amalia Rodrigues, the queen of fado music from her earliest public performances in the 1930s to her death in 1999. EFOR films has produced a 65-minute documentary on DVD called Amalia Rodrigues: The Spirit Of Fado, which not only traces her career but serves as a primer to introduce this unique music of Portugal to those who have not experienced it yet.

Composed almost entirely of clips of the dynamic Rodrigues, culled from extensive film, television, and concert footage, we not only witness her rise as a performer, but her quest to expand the definition of fado’s musical boundaries. While remaining true to the emotional spirit of the genre, Amalia searched for material among the poets of early Portugal and her contemporary composers.

While some purists were put off by what they saw as a bastardization of the form, her legions of fans the world over responded with overwhelming enthusiasm. Not surprisingly she had resounding success in Portuguese Brazil; in fact she recorded her first LP there, but she was also embraced and adopted by an adoring French public who saw in her the continuation of Edith Piaf and the tradition of the chansons. 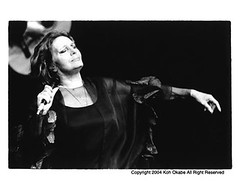 If you’re like me and the extent of your knowledge of fado was that you knew the word referred to a type of sad Portuguese song, without knowing much more beyond that, then this documentary will be a revelation. Here we are treated to an exploration of the musical form in extensive detail and remarkable depth.

Due to her remarkable abilities and the depth of her passion for the music, Amalia was able to perform a wide-ranging repertoire of fado material. She seemed to be striving to define saudade with each performance; not content with mournful being only monochrome, she flavoured her performances to express more than just one aspect of sadness.

Amalia Rodrigues: The Spirit Of Fado takes us on the tour of Amalia’s life, from her humble beginnings in a family so poor that she was given over to the care of her grandmother in Lisbon at the age of seven until she was fourteen. Clips from her pseudo-biographical film (she was the first to admit it stretched the truth in certain areas) are used to illustrate earlier points in her career, while a voice over fills in the details.

For example her 1939 performance in Spain at the request of the Portuguese ambassador is not a recording of the actual event, but the dramatization of that moment as was presented in the film. But as her career progresses and recording technology improves, the stages in her career are marked by performances in all parts of the world.

With clips from The Eddie Fisher Show and Paris’ Olympic Theatre we see her in the 1950s, film footage from concerts in Italy and France again bring us up into the sixties, and concert footage from stages around the world, mainly Europe and South America, carry us until the years just prior to her death.

Amalia once said of herself, “If I sing like I sing it is because of Nature,” meaning she had no choice in the matter but was always intended to sing. It was said of her that fado made her and she made fado, implying a symbiosis of singer and material that is as rare as it is wonderful. Watching this documentary, you see her performing tangos and other genres of music aside from fado, and you can’t imagine her achieving such success without fado, or fado ever having spread beyond the borders of Portugal without her.

If you are already a fan of Amalia Rodrigues you will find plenty of obscure footage from films shot in Portugal and lots of music to satisfy you. If you are new to both the music and the artist, than I can’t think of a more ideal introduction than Amalia Rodrigues: The Spirit Of Fado. Aside from the documentary, the DVD also includes ten extra video tracks and ten audio tracks just to round out your education and enjoyment.