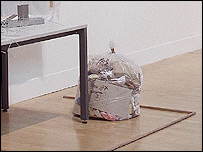 I am a big fan of conceptual art – I LIKE being forced to rethink the ontological staus of objects and my unexamined assumptions by daring and jarring contextual juxtapositions and other such similar theoretical theorizing. My own best art uses “found” objects (audio and physical) as creative fodder.

But it’s important to LABEL the stuff so the hard-working philistines – with nary a post-modern thought in their serene little heads – don’t toss your precious aesthetic concoction out with the week-old fish sandwiches.

A bag of rubbish that was part of a Tate Britain work of art has been accidentally thrown away by a cleaner.

The bag filled with discarded paper and cardboard was part of a work by Gustav Metzger, said to demonstrate the “finite existence” of art.

It was thrown away by a cleaner at the London gallery, which subsequently retrieved the damaged bag.

The 78-year-old artist replaced it with a new bag.

….Tate Britain said the work “is made up of several elements, one of which is a rubbish bag included by the artist as an integral part of the installation”.

“On 30 June, the bag was accidentally removed and damaged but was subsequently replaced.”

The gallery said the work is now covered over at night so it cannot be removed again, and staff have been made aware that the rubbish bag is part of the exhibit.

….It is not the first time such a mistake has been made. In 2001 a cleaner at a London’s Eyestorm Gallery gallery cleared away an installation by artist Damien Hirst, having mistaken it for a pile of rubbish.

The collection of beer bottles, coffee cups and overflowing ashtrays was said to represent the chaos of an artist’s studio. 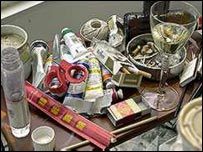 And in the 1980s the work of Joseph Beuys, which featured a very dirty bath, was scrubbed clean by a gallery worker in Germany. [BBC]

That last one is my favorite: picture the conscientious sanitation technician diligently scrubbing away meaning along with the soap scum – pure performance art (had anyone seen it).

I am certain “The Scream” thieves find this all quite amusing.