Deep Forest – Essence of the Forest 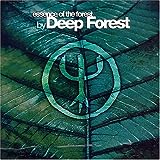 I vividly recall when Deep Forest’s first hit, “Sweet Lullaby,” first poured into my ears, a beguiling hybrid of spacious ambient house and verdant pygmy chants and throat singing, an oddly intimate and organic music tickling something familiar in an atavistic corner of my brain.

Twelve years and four more albums later Deep Forest has a collection out on Epic/Legacy, Essence of the Forest, and while the first penetration into hte Forest is still the deepest (represented here by remixes of “Sweet Lullaby” “NIght Bird” and Desert Walk”), unlike other “high concept” units, Deep Forest has continued to make inventive, surprising, and daring use of the indiginous-electronics formula, turning their attention to Eastern Europe for the second album, Boheme (their second hit “Marta’s Song” featured the great Hungarian singer Marta Sebestyen), turning up the heat a bit with Latin and Caribbean rhythms on Comparsa, and an odd hybrid of Japan and the American South (which works on “Dignity,” less so on “Yuki Song”) for Music Detected.

It never feels rote, and Sanchez/Mouquet, much to their credit, seem to care as much about execution as about concept – the forest remains deep and worth exploring.

Movie Review: ‘Poly Styrene: I Am A Cliche’