Declare Your Rock the Get Out and Vote

I agree that getting as many people as possible involved in the political process is an unambiguous good, and I also agree that voting is like most habits: the younger you begin, the more likely you are to stick with it. I am also glad to see Republicans are no longer ambivalent – at least officially – about get-out-the-vote efforts.

This election season is seeing an unprecedented number of voter campaigns:

Today, Declare Yourself, a nonpartisan voter-registration group started by the television producer Norman Lear, will raise two giant billboards in Times Square, showing Christina Aguilera and André 3000 with their mouths held shut, next to the message, “Only you can silence yourself.”

“We’re approaching a cause as a brand,” said Howard Benenson, chief executive at Benenson Janson in Studio City, Calif., the Declare Yourself agency. “It’s not any different than any corporate American company,” he said. “It’s all about creating a brand of passion for consumers.”

The great unregistered are receiving pitches from groups with wildly divergent world views, including Cast the Vote, the Hip-Hop Summit Action Network, Redeem the Vote, Voter Virgin, VoteLoud, Voces del Pueblo and Punk Voter. Rock the Vote and Choose or Lose, continuing campaigns that were established in the 1990’s, are veterans by now.

But all the vote marketers are searching out their targets with a sprawling set of marketing strategies, like sending interactive text messages to cellphones, selling tie-in merchandise like $20 designer t-shirts, creating Web logs and producing performances by everyone from the Rza of Wu-Tang Clan fame to the Rock ‘N’ Roll Worship Circus.

Political analysts said the newly pervasive voter-registration drives reflected lessons from the 2000 election, which showed that a few votes can decide large events, as well as a widespread sense that the coming election holds especially high stakes. But the efforts stem, too, from indications that young people, the targets of many of these campaigns, are increasingly engaged in politics.

In the Iowa caucus this year, for example, 17 percent of the participants were under 30 years old, up from just 9 percent in 2000, according to the Harvard University Institute of Politics.

….But the attention-getting campaigns from nonpartisans lead to questions about who benefits from registering young voters. Ian Rowe, vice president for public affairs at MTV, said that the most common assumptions, that the young tend not to vote but lean Democratic when they do vote, are not evident in the polling MTV has conducted in conjunction with its Choose or Lose program.

“This year, the audience is split and undecided,” Mr. Rowe said.

And although the most recent poll from the Harvard Institute of Politics, in April, found that college students favored Senator John Kerry over President Bush by about 10 points, the Republican Party says it is not concerned.

Christine Iverson, a spokeswoman at the Repulican National Committee, said, “We support any and all efforts to get more people involved in the political process.”

“They’re trying to give voting cultural cachet,” Ms. Cox said of vote marketing in general. “Like it gives you social capital in the same way that buying a Britney Spears album or getting a tattoo does. But the problem is, voting isn’t ever going to make you seem cool.” [NY Times]

Speak for yourself, stupid bitch: voting equals participation and the sharing of power – what isn’t cool about that?

Have I mentioned I despise this idiot, and I am extremely resentful when she is held up as representing bloggers? She is a rent-a-flak sitting on top of one of asshole Denton’s porn-and-politics sites. She is the whore, he is the madam.

Back to the story: 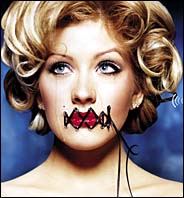 To that end, the image of Ms. Aguilera, with her mouth sewn shut in ribbon, and the other celebrities will also appear as ads in magazines aimed at young people, including Fader, Interview, Rolling Stone and Us Weekly. Other ads feature performers like Amber Tamblyn, the star of “Joan of Arcadia” on CBS, and La Toya London, a finalist on the third season of “American Idol.” The spots directed by Mr. LaChapelle include parodies of makeup and pet food commercials before turning a sharp corner to depict the sealing, bolting or muzzling of stars’ mouths.

….”This is based on the same research that has been borne out on Madison Avenue, that if you get young people buying a Chevrolet, they’re going to stay in the General Motors family,” Mr. Lear said. “The same thing is true of voters: if you get them to vote the first time early, the chances are far greater they will be lifetime voters.”

Once one participates in the process, a sense of ownership and responsibility sets in, keeping most voters tethered to the system.

I had an avowed communist poli sci professor in college who said you could speak your voice most loudly by NOT voting, as by not voting you were rejecting the entire system. It sounded stupid to me then and only more so now.