On June 13 the self-titled CD will be available with bonus tracks.

A new form of the self-titled debut release from Brandi Carlile will be hitting the shelves June 13. The CD has been repackaged to include a radio edit of "What Can I Say" and a new mix of "Throw It All Away." Also included are two bonus tracks, a live version of the Elton John song "Sixty Years On," and "Tragedy (Austin Cello Version)," which was featured on the June 4 episode of Grey's Anatomy. 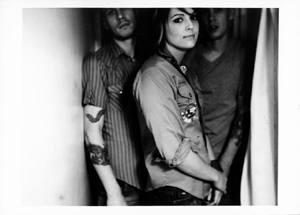 Now 22, Brandi first took the stage when she was eight. Growing up fifty miles outside of Seattle, Washington, she says music was always part of her life. She remembers locking herself in her room to see just how high a note she could hit and hold it for as long as possible. All that practice paid off: at her tender age she has a clear and rich voice with incredible range.

She was signed to Columbia Records in 2002. Some of the self-penned album of pop-rock songs was recorded in her home. Says Carlile, "I live in a log cabin and the ceilings are really high, so it sounds great. We rented a Pro-tools set-up and put it smack in the middle of my living room." The album was produced by John Goodmanson, known for his work with Sleater-Kinney and Blonde Redhead.

Earlier this month, Carlile hit the road. She will be opening for The Fray for the mostly sold out current leg of their tour. She will be with the band until June 24. After that there are a few headlining dates as well as some festivals in what remains of her summer tour.

Streaming MP3 of “Throw It All Away”
Windows Media
Real Media