It’s been a weird week around old London town for the man the Guinness Book of World Records calls “The Most Watched TV Star in the World.” In town to shoot a commercial for British Internet company Pipex, last Thursday David Hasselhoff, 53, pumped a little iron in the gym at the Sanderson Hotel in London’s West End then headed to the washroom for a shave. 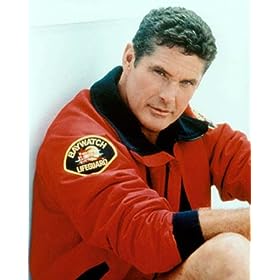 The Baywatch icon and Continental singing star worked himself up into such a lather shaving that he managed to smash his head on a low-hanging chandelier. How low WAS this chandelier? Hasselhoff is tall at 6’4″, but he isn’t Shaq or anything. Maybe this is what they mean by “mini-gym.”

Anyway, the notoriously oversized Hasselhoff head struck the fixture with such manly force that shards of glass rained down upon the star, lodging in his exposed right arm and severing a tendon. That is a massive amount of self-inflicted violence.

Hasselhoff spent a night at St. Thomas’ Hospital in central London after doctors operated to repair the damage.

So that was pretty strange. But then yesterday, some of the press reported a “drunken” Hasselhoff — who underwent alcohol treatment in 2002 and 2004 — had been booted from the lustrous lawns of Wimbledon for “trying to barge into the tennis players’ private bar after an all day drinking session,” and that he was “ejected from the ground and told not to bother coming back” for being “absolutely steaming drunk and … very abusive.”

Today all fronts denied the reports. The All England Club, which runs the hallowed tennis event, said no flipping way, stating that “security guards knew nothing of the claims,” and that Hasselhoff “wasn’t ejected.”

He apparently DID try to enter the press area while searching for Court 13, but was “not correctly accredited,” according to the All England spokeswoman. 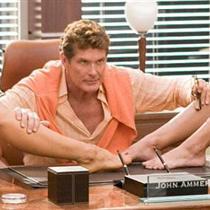 Coincidentally, Hasselhoff recently cancelled plans to play Captain Hook in a Christmastime performance of — quite seriously — a pantomime version of Peter Pan at the New Wimbledon Theatre, just a firm backhand away from the famed tennis grounds. The pantomime performance conflicted with Simon Cowell’s latest TV series, America’s Got Talent, which sees Hasselhoff — one of Germany’s favorite pop singers — judging aspiring performers.

Hasselhoff is also featured in the new Adam Sandler film Click, and appeared as himself in the last few years in Dodgeball and The SpongeBob SquarePants Movie. Playing yourself: now that’s an icon.

The icon rocks, after a fashion