Fines for indecency go up by a factor of ten in continued Nipplegate fallout.

Nipplegate reverberations coalesced into legislation that increased fines tenfold for stations that breach indecency standards, as the U.S. House passed the Broadcast Decency Enforcement Act by a vote of 379-35 on Wednesday.

When President Bush signs the bill, which passed the Senate unanimously last month, the new law would mean that stations would be liable for up to $325,000 per indecency infraction, defined by the Federal Communications Commission as sexual or excretory content of a “patently offensive nature” between the hours of 6 a.m. and 10 p.m.

FCC Chairman Kevin Martin, a decency zealot, crowed, “I welcome Congress’ decision to give the Commission increased fining authority in our efforts to protect children from inappropriate programming. Many parents are increasingly concerned about what is on television and radio today. Today’s vote demonstrates that Congress shares their concern and has a clear desire for a more meaningful enforcement of our decency standard.”

The bill did not include earlier provisions that would have allowed individual performers to be fined for infractions, broadcast license suspension after three offenses, and did not bring cable and satellite broadcasts under the FCC’s purview.

Rep. Fred Upton (R-Mich.), who first introduced legislation to increase penalties in January 2004 (two weeks BEFORE Nipplegate), announced during floor debate on the bill Tuesday, “We are entering the home stretch in getting the filth and triple-X smut off the public airwaves.”

“I believe that government has a responsibility to help strengthen families,” Bush said in a statement indicating he would sign the bill. “This legislation will make television and radio more family friendly by allowing the FCC to impose stiffer fines on broadcasters who air obscene or indecent programming.”

”This is a victory for children and families,” said Senate sponsor Sen. Sam Brownback, R-Kan. The higher fines were needed, he said, ”in a world saturated with violent and explicit media.”

“We hope that the hefty fines will cause the multibillion-dollar broadcast networks finally to take the law seriously,” said L. Brent Bozell, Parents Television Council president. 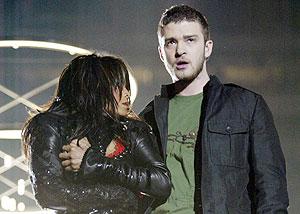 Just last week, the Federal Communications Commission concluded that it was correct to decide laws against indecent broadcasts were violated by “the offensive spectacle of a man tearing off a woman’s clothing on stage” during the infamous Super Bowl 2004 halftime broadcast, and that their decision to fine CBS stations $550,000 for the offense would stand.

“In issues related to programming content, NAB believes responsible self-regulation is preferable to government regulation,” said Dennis Wharton, spokesman for the National Association of Broadcasters, the industry’s trade group. “If there is regulation, it should be applied equally to cable and satellite TV and satellite radio.”

In what could be a test case on the FCC’s authority, CBS, along with the other three major networks and their affiliate organizations, went to court in April seeking to overturn a new round of indecency penalties proposed by the FCC in March.

The indecency wars are just getting warm and wet.