Fun, Fun, Fun in the Warmth of the Sun.

Nothing quite goes with a hot summer day like The Beach Boys. Of course, when I bought my tickets nearly a month ago, I had no idea the temperatures would be a breathtaking 100 plus, and by breathtaking I mean the "suck the air right from your chest" kind of heat and humidity. Yet, it still seemed like the perfect combination for a Sunday evening and with the way the open air venue of Freedom Hill is positioned, a consistent breeze fended off heat exhaustion.

Before the capacity crowd got down to some fun fun fun in the sun, we were treated to the 9 House Band. They are a pretty familiar face on the Detroit club circuit and are fronted by one-time Boston Bruin, Kraig Nienhuis. 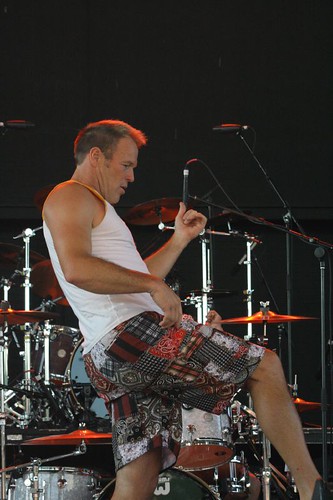 They revved up the crowd with their renditions of a wide selection of music, everything from "Folsom County Blues" to "Born to Run" to "Signs" to a scorching hot Queen medley. They burned up the stage with their entertaining antics, rocking style, and enthusiastic delivery for a forty-minute set that left the crowd anxiously awaiting the main attraction.

Before leaving the stage they announced they would be playing in the Hillside Club for an hour and a half after the concert for anyone who wasn't ready for the party to be over, or if you just wanted to give time for the traffic to clear before taking to the road. I was so impressed with their performance I considered hanging out, but declined because of the two-hour drive home I had ahead of me. Those who did stay not only got to rock out with this great band, but were treated to a special bonus when The Beach Boys' special guest for the evening, John Stamos, showed up and sat in on drums. 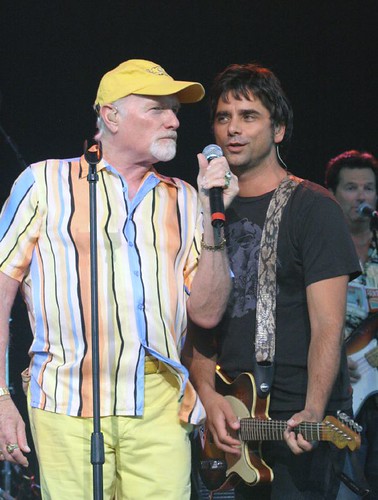 After the 9 House Band left the stage, it was only a short twenty minutes before the stage was reset and the legendary Beach Boys came out. Joining founding member Mike Love and long time member Bruce Johnston on stage were the usual touring members of recent years: Randell Kirsch, Scott Totten, Christian Love, John Cowsill, and Mike Kowalski. Also bringing an exuberant energy to the stage was long time special guest John Stamos (who has played choice dates with the band for twenty plus years).

As one would expect, the next two hours were filled with the classics. Be it the surf songs ("Surfing Safari," "Surfing U.S.A."), car songs ("409," "Little Deuce Coup"), songs about the girl ("Help Me Rhonda"), or relationship laments ("Getcha Back," "When I Grow Up to be a Man") the enthusiastic crowd was dancing in their seats, the aisles, and the lawn to the classic rock sounds.

One of the things that most impressed me was the truly multi-generation crowd — those in attendance ranged from early teens to those in the sixties, seventies, and even older, proving the music itself is not only family friendly but appealing and relevant no matter the age of the listener. Case in point, my teenage son accompanied me, and had just as much fun as I did. 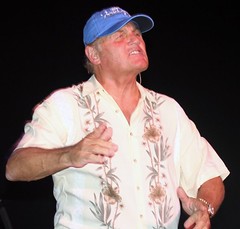 The set-list was heavy with songs from their recent compilation The Warmth of the Sun, including "Wendy" and a not often heard live "Disney Girls." Both saw Bruce Johnston taking lead vocals. Fans of Full House were given an extra special, and rarely seen live, treat when Stamos took center mic to sing "Forever" the Dennis Wilson-penned song that saw a resurgence after being featured on the long-time hit show (though it's Wilson's version that appears on the Warmth of the Sun CD). Stamos also treated the crowd to "Good Timin'," a song originally sung by Carl Wilson. 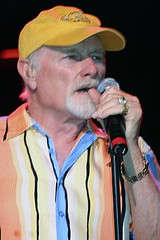 In a recent press release about the release of The Warmth of the Sun, Mike Love was quoted as saying, "I’m really proud of this collection of songs and the body of work it represents. I’m honored to know that the music of The Beach Boys has stood the test of time in the form of album sales and sold out concerts… It’s great to be in the Billboard Top 40 with our new collection. After all, we started in the ‘60s and now we are in our 60s!” It's almost hard to believe this band and the music has been around that long when you see the energy Love, Johnston, and the rest of the band deliver it with and it was certainly a treat to hear some of these songs that have not been a part of their live set for awhile.

Attending a 'fun-in-the-sun' Beach Boys concert has become a bit of a mid-summer tradition for me in recent years. I look forward to it as almost a mini-trip to enjoy the sounds of a beach vacation and a three to four hour escape from the stress and pressure of real life. As the encore began with "Kokomo" it was apparent that it had, yet again, been effective and even though it was time to leave the island fun, I could do so relaxed and recharged.

If you don't get a chance to catch The Beach Boys on their summer tour and are able to stop by The Rock and Roll Hall of Fame in Cleveland, Ohio, you will be able to catch their special exhibit “Catch a Wave: The Beach Boys, the Early Years,” scheduled to run from June 22 to December 31, 2007. It is a tribute celebrating the music of the band that defines summer and fun.

*All photos by Connie Phillips