Geek rock superstar gets a warm reception in Seattle.

Cursing the parking situation in downtown Ballard, my friend and I arrived at the Tractor Tavern a few minutes before Jonathan Coulton's set was supposed to begin. Thankfully he did not hit the stage until ten minutes after the start time, which gave us time to visit the facilities and secure seating.

The small venue was packed, and all of the seats were claimed, but we located two stools and re-positioned them on the other side of a post, thus allowing us to actually see the stage. Other latecomers were not so fortunate, and by the time the show began, the standing-room only overflow area was filled with concert goers straining to see the stage over the heads of those in front of them.

Without any introduction, Coulton stepped and was greeted with raucous applause. He seemed taken aback by both the enthusiasm and the size of the crowd, and launched straight into "The Future Soon," one of his more popular tunes. This was followed by another favorite, the pharmaceutical anthem "I Feel Fantastic."

Although I've listened to the recording of his cover of Sir Mix-A-Lot's "Baby Got Back," 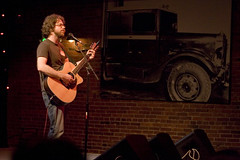 I was not prepared for the setup when it came. "I'm going to take this opportunity to slow down for the ladies… and also for some of the more sensitive men," he said, with a sincere tone and a straight face. "This is not my song, this is a cover song, but in a way it belongs to all of us." Transcribed, it loses some of the humor, but in the moment it caused the crowd to break up in laughter, which continued on throughout the song.

The rest of the show was a mix of geek favorites ("Skullcrusher Mountain," "Mandelbrot Set," and "Code Monkey"), intelligent acoustic pop ("Better," "I'm Your Moon," and "A Talk With George"), and the just plain bizarre-yet-cool ("Creepy Doll," "I Crush Everything," and "Mr. Fancy Pants"). One standout is "Re Your Brains," which involves some audience participation. After the song ended, Coulton commented that the experience for him was what he imagined it would feel like to be chased by a mob of zombies.

At one point during a particularly quiet and reflective song, I looked around and realized that not a single person in the entire venue was making any sort of disturbance. Everyone was focused on Coulton, and if they weren't, they were at least quiet about it. It is rare to see a solo performer with that kind of stage presence or fan base. I have been to a number of "listening rooms" to hear acoustic performers and rarely have I experienced that kind of intensely focused and engaged audience.

The end of the show was a bit disappointing because it was apparent that both Coulton and the crowd would have liked for the show to go on longer, 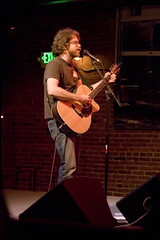 but the Tractor had another band booked for the late show. When he came out for a brief encore, he asked what he should play. Requests were shouted from all corners of the room, including my own, but unfortunately he did not choose my request ("Ikea"). In spite of that, I left the venue feeling satisfied and pleased with how the evening had turned out.

My only complaint is that the Tractor Tavern was too small for the turnout. I hope that the next time Coulton plays in Seattle, it will be at a larger venue with more seats.

One front-row fan caught most of the show on video, which is available on YouTube. All of his songs can be streamed from his website, as well as downloaded and purchased (a few are free), so do check them out. If Jonathan Coulton ever plays to your town, I promise it will be a show you won't want to miss. Just make sure to get to the venue early.

photos by Chris Blakeley because mine were not so good