An evening of surprises and disappointments.

Jim Bianco, Jenny Owen Youngs, and Sean Hayes played a show at the High Dive in Seattle's Fremont neighborhood Monday night. The venue is a narrow, intimate space with a full bar and kitchen. The food is of the tasty pub food variety, and the bar selection is adequate. I mainly go there for the music.

Prior to the concert, I had not listened to any of the acts, and had only a passing familiarity with their names. Probably not the best example of research, but I went with an open mind and low expectations. In some cases, those expectations were exceeded far beyond my imagination, and in others, not so much.

Managing to score a seat relatively close to the stage, I settled in for the evening. Los Angeles based singer/songwriter Jim Bianco and his band were the first ones up. They started their set with a song that has a French or Latin rock vibe, including the accordion and a small brass horn that looks like a half-sized cornet. As it turns out, this was just a sample of the styles the band incorporates in their music. Overall, I would describe Bianco's music as roots or folk rock, drawing from a variety of Americana musical traditions.

The music itself is on the fringe of my interests, but that was not an issue thanks to Bianco's performance and stage presence. His personality goes far beyond the stage, and he is comfortable with interacting with the audience, even when there is a fifteen foot gap between us and him. For Bianco, the fourth wall does not exist. 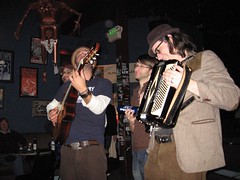 As if his stage antics weren't enough to reinforce that, he brought the band down to the floor to stand inches away from the front line of the audience to perform the penultimate song in his set. With tight harmonies, the cohesive sound of the quartet stilled the audience, and for those of us who were not in the back of the room gabbing with our pals, it was a magical moment. Bianco followed it up with a sultry tune that brought out the catcalls, whoops, and hollers from the audience.

Even though most seemed to be there to hear the other two acts, Bianco clearly impressed the crowd. If you get a chance to see him, I recommend you do. Whether his music is your thing or not, he puts on a good show.

Chris Kuffner on bass and Adam Christgau on drums put in double time last night, playing with both Jim Bianco and Jenny Owen Youngs, who was the second performer of the evening. Youngs was also joined by guitarist Bess Rogers, who has a sweet voice, and I wish I could have heard more from her.

Compared to Bianco's set, Youngs' was a study in understated intensity, heightened mainly by the electrified indie pop pouring forth from the speakers. Her vocals are the love child of Erin McKeown and Jenny Lewis (Rilo Kiley), delivered with almost no physical expression. Youngs couldn't stand still while performing, but the activity of her body stopped at the neck, leaving her facial expressions bland and seemingly uninterested.

Where her stage presence lacked the punch of Bianco's, she attempted to make up for it with the liberal use of profanity. I'm no prude, but it quickly wore thin for me, and I silently wished she would say something clever and witty rather than resorting to curses meant to titillate the audience. On the other hand, I really shouldn't have been so surprised since the song "Fuck Was I" is currently her most well-known composition.

After a series of long, slow, expressionless songs that drug the momentum of the evening down to a near halt, things picked back up again with the final song of the set, the aforementioned "Fuck Was I." Still, I found myself feeling less interested in Youngs' music than I was after the first few songs of her set. On the up side, she wasn't the first performer on the bill, which meant I stuck around longer than I would have.

After a short set change, Sean Hayes came out to play. Kuffner and Christgau finally got a chance to relax for the evening, since Hayes brought his own band. The crowd that had gathered in the space in front of the stage for Youngs stayed put, and they seemed to be equally interested in listening to Hayes' set. So was I, but in the middle of his first song, his monitor started smoking and the smell was enough to drive me to the back of the room for fresh air. At which point, I decided that his tenor vibrato, the uncomfortably packed room, and the late hour, were enough to tip the balance towards driving the two hours over the mountains back to my waiting bed.

There are still a few days left of their tour, and it would be well worth your time to go, if just to bask in the energy emanating from Jim Bianco.