"Less rock, more talk. No, the other way around."

Intimate probably wouldn't be the first word to come to mind when describing the music of Frank Black. It is, however the perfect word to describe his October 30 show at the House Of Blues in Cleveland, Ohio.

Born Charles Thompson IV, this month's featured artist has had a long career in music, spanning back to the days he was known as Black Francis as a member of the Pixies. The alternative rock band whose music was heavily influenced by the punk and surfer genres released five studio records and 12 singles in their nine year stint. When the band dissolved, Black Francis became Frank Black and his music took a new shape and form as well. 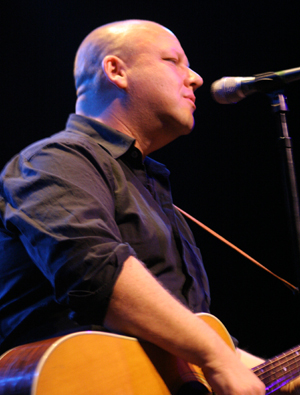 It was this incarnation that took the stage Monday night and delivered a short acoustic set, including "California Bound," "The Shrimp Song," "Abstract Plain," "Two Reelers," and a few others before bringing out his band. Together, they rocked the house for another twenty-one songs of his signature brand of music propelled by his driving guitar and accentuated with his delivery, varying from soulful and melodic to mournful howls calling out from somewhere deep inside.

The band behind Black was exceptionally tight and had just as much energy as the crowd who showed up to take in the evening of entertainment. Members were Erie Drew Feldman (Bass), Duane Jarvis (Guitar), Billy Block (Drums), and Jack Kidney (saxophone, harmonica). Driving guitars, mournful howls, and high energy — but didn't I say the show was intimate?

The Cleveland House Of Blues is much like the only other one I've ever been in (Orlando), but I assume the individual units of the franchise all have the same small feel. The surroundings added to the atmosphere, which gave the overall feeling these guys just came over to jam in your living room, but it was more than that.

When introducing the band after the acoustic set, Black said they were there to keep him mindful of the time, to keep his show moving. And move they did, from one rocking song to the next, only randomly and intermittently slowing it down. At another point in the show, while communicating with a familiar face, he stopped himself, saying "less rock, more talk. No, the other way around," before breaking into another song — rocking the house yet again. 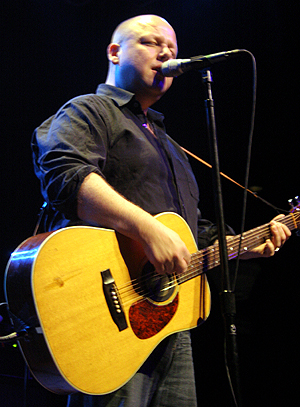 But the main reason I would describe the show as intimate was because of the connection made between Frank Black and the fans through song. Whether it was the fun "Rock A My Soul," the intense "Bullet," or the apocalyptic "Six-Sixty-Six," he held the devoted crowd's attention for every note of every song. From that connection, fans would warmly shout out their admiration or requests and he would pause and address the person or subject, but it was only briefly and then he would return to the music. It is what everyone was there for, after all.

The list of songs Frank Black blazed through was long and covered his expansive career. Some of the highlights were "I'm Not Dead (I'm in Pittsburgh)", a song featuring the aforementioned passionate howl; "The Black Ryder," the high-energy show opener; and "Bullet" and "Six-Sixty-Six," which kept the crowd moving and ventured into some of those darker lyrics Black is known for. "Rock a My Soul" offered something for the fans of old school rock and the band delivered an exceptionally beautiful, harmonious opening on "Horrible Day." (Full set list below)

As Frank Black's show wound down, he gave fair warning, saying good-night and thank you to the crowd before the final three songs. The last of which, "Sing For Joy," seemed as though it was meant to be an encore. He had turned and almost left the stage when he made his way back to center to break into the final song.

Frank Black is Blogcritics' Featured Artist for November. Stay tuned for an interview, reviews of the music, and news and information. (All photos were taken by Connie Phillips at the Cleveland House of Blues.)