At one of their only two Pacific Northwest shows this year, the greatest band in rock seemed to be on a mission to spread the E Street gospel even more than usual.

For those of us who have attended dozens of Bruce Springsteen & The E Street Band concerts over the years, sometimes it can seem as though you have seen it all – the crowd interaction, the sign requests, the rarities and the genuine “holy shit!” moments – and that nothing can surprise you anymore. 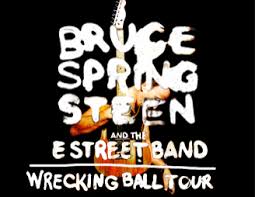 All of these factors were on full display at this past Wednesday night’s marathon, three hour plus blowout at the Rose Garden in Portland, Oregon too.

But in many ways, they were amplified to the power of ten. At one of their only two Pacific Northwest shows this year (they also played Vancouver BC, but mysteriously skipped Seattle), the greatest band in rock seemed to be on a mission to spread the E Street gospel even more than usual.

Bruce was particularly animated at this show, and for a guy who has never been bashful about getting up close and personal with his audience to begin with, there was more glad-handing with the fans than ever. How many aging rockers can you name that are still crowd-surfing in their sixties?

At several points during the show, fans were brought up onstage for their own round of “Sing along with Bruce.”

There were the cute little girls up there for “Waiting On A Sunny Day.” There was the group of gals with the matching “Lesbians Love Bruce” shirts during “Darlington County” (prompting Springsteen to thank “my lesbian fan club”). And there was the guy who celebrated his 50th birthday with a sign request for “Growin’ Up,” only to end up in his own duet of the song with The Boss onstage (and forgetting the words in the process).

Speaking of sign requests, there were a ton of them at this show, and no less than six of them got played.

Fortunately, they were all great choices, ranging from “Rosalita” in the encores, to the rarely played “Seeds,” and two of those genuine, aforementioned “holy shit!” moments in “Drive All Night” and the River era-outtake “Loose Ends” (which eventually made the Tracks boxed set).

In the case of the latter, the request came from a sign that featured an Elvis Costello style “wheel of hits,” which Bruce brought up yet another audience member to spin. After a couple of false starts, the wheel finally landed on “Steve’s Choice,” prompting an evil grin from guitarist Little Steven Van Zandt and one of those ultra-rare song choices that hardcore Springsteen fans salivate for.

For such a rarely played track, the E Street Band nailed it too. Let’s hope that “Steve’s Choice” becomes a tradition.

“Drive All Night,” from the 1980 double album The River has probably been played less than a dozen times in the 30 plus years since its original release, and less than half that since Jake Clemons inherited the sax spot in the E Street Band. But in a moment that would surely have made Uncle Clarence proud, Jake filled those very big shoes with a stunning, pitch perfect solo.

In a show which saw Bruce referencing ghosts often – particularly on a stunning “My City Of Ruins” (which has come full circle back to its original theme about dying Jersey Shore communities, devastated once again now by Hurricane Sandy) – Springsteen also paid tribute to the ghosts of fallen E Street comrades Clarence Clemons and Danny Federici. The spirits of both men hung heavily over the Rose Garden all night, but particularly so during both “My City Of Ruins” and “Tenth Avenue Freeze-Out.”

Other highlights from the wildly unpredictable setlist included “Land Of Hope And Dreams” as the show-opener (the song usually closes out the main set, or is played during the encores). On a rare, solo version of “If I Should Fall Behind” (and another sign request, this time from a couple celebrating their wedding anniversary), Bruce turned in one of his strongest vocal performances of the night.

“Jack Of All Trades,” one of the more rarely played tracks from Wrecking Ball, and a cranked sounding “Johnny 99” were also standouts. Interestingly, “This Depression” and “Reason To Believe” were both sound-checked for what one would assume were the same slots. Both sounded great for those of us lucky enough to hear them waiting in line for the GA section on the outer concourse of the arena.

For longtime veterans of Bruce Springsteen & The E Street Band concerts, it can sometimes be a little tempting to become jaded, or to judge these shows merely by the unpredictable setlists. Part of this, is simply because Springsteen sets the bar so high, that his most ardent fans tend to become somewhat more naturally demanding themselves. These are of course the same fans who would probably scream the loudest if either “Badlands” or “Born To Run” weren’t played at all, even though both have been dusted off at virtually every E Street Band concert since 1978.

Those fans had to leave the arena feeling pretty satisfied in Portland. But even if none of the rarities had been played at all, this would have ranked as one of the great ones. The newly expanded E Street Band played their asses off for over three hours making for one very high energy show. The band was tight, the new horn section sounded great, and Bruce and Steve in particular looked like they were having the time of their lives.

It was definitely an “on” night.