Most American parents, and kids for that matter, have accepted the vital importance of auto child safety seats for babies and young children: it’s the law of the land and you can’t even take a newborn home from the hospital without producing an approved baby pod.

But when kids outgrow their full-service toddler seats at around 4, the story is much murkier. National Highway Transportation Safety Administration research indicates at least 80 percent of children who should be using booster seats are not. Without this extra lift, in a car crash, a safety belt alone can cause fatal or disabling abdominal, spinal, head and neck injuries. According to a study by Children’s Hospital of Philadelphia, the use of booster seats lowers the risk of injury to children in crashes by 59 percent compared to the use of safety belts alone.

In an effort to improve this situation, the NHTSA and the AdCouncil announced this week a unique tie-in with Walt Disney’s original Cinderella animated feature — coming out next week on DVD, by the way — to educate families on the importance of booster seats until children reach 4 feet 9 inches in height. A key part of the effort is an appealing, expansive PSA campaign on television, radio, outdoor and online media, utilizing original footage and characters from the Disney Cinderella film, designed to create awareness among parents of young children who have outgrown their toddler seats that a booster seat is a must for any child under 4 feet 9 inches tall to lift them up so that a safety belt fits properly. Booster seat use is required by law in 33 states and the District of Columbia.

On October 4, Buena Vista Home Entertainment will release a digitally restored, “5.1 Disney Enhanced Home Theater Mix” audio (Cinderella had the distinction of being the “noisiest film restored yet”), two-disc Platinum Edition of Walt Disney’s original 1949 classic Cinderella on DVD for the first time ever. 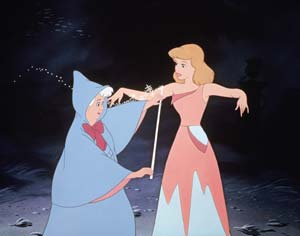 The DVD bonus features range widely, demonstrating the fairytale’s integral part in the lexicon of pop culture with clever items such as the ESPN Classics’ featurette Cinderella Stories, which showcases many of the most unbelievable “Cinderella” moments in sports history, “The Royal Life,” which allows participants to scan their picture and become part of a fairytale world that they can create, and many elements which explore the history of Cinderella.