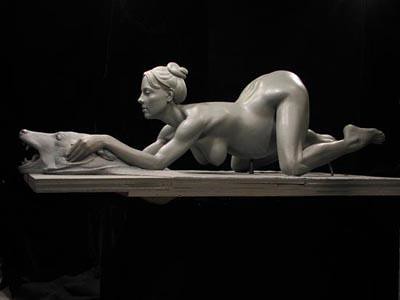 Britney, 24, heads out for an automotive stroll with tyke and man-with-phone in early February. Sean, aged four months, is photographed riding in mom’s lap without the benefit of a child safety seat or protective device of any kind (unless vehicle is struck from rear, in which case mom offers puffy padding). This is illegal as well as styrofoam-for-brains stupid. 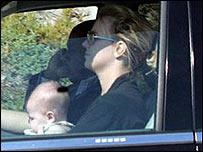 A few days later Spears admits she “kind of like … made a mistake” on Access Hollywood, but claims that her lapse was due to panic unleashed by a welter of rabid paparazzi. “Being put in the situation that I was in, it was kind of bad with the paparazzi,” she explained. “Last week, my mom and me went out and they were on us really bad, so it’s just, you do instinctively what you need to do.”

Be strong Britney, be brave.

In response to publication of the incriminating photograph, the Los Angeles Department of Children and Family Services visits Spears’ Malibu home.

Then, Saturday afternoon, April 8, one or more DCFS officials, accompanied by a sheriff’s deputy, visit Spears/Federline Manor once again. “It’s a very standard, routine patrol request,” said Debra Glafkides, from the sheriff’s department Tuesday. “We just roll out with them. We stood by, we took no action, no report or anything.”[ADBLOCKHERE]

“They determined that the parents were not involved in any injury and nothing improper was done in the home,” the singer’s lawyer Marty Singer said on behalf of the couple. He added that the Department of Children and Family Services concluded that there was “no problem.”

Star magazine reported last week that seven-month-old Sean had suffered a “minor skull fracture and a blood clot” on March 31 in a “high-chair mishap” while in the “care” of his nanny in Malibu. A child-welfare inquiry was opened as a result. Britney and K-Fed were in Dallas at the time, according to the Star report.

One can only weep for the lad – perhaps the Federlines were not quite ready for the odious responsibilities of parenthood.