If you ever wondered about Nelson Mandela, after this material that will no longer be an unanswered question.

When Nelson Mandela came to Canada in his first visit after his release from jail, he gave an open-air speech in a park in downtown Toronto. One of the thousands of people who went to that speech was my mother. She told me later that it was one of most fulfilling and inspiring moments she in her life.

My mother had been one of the people who, long before it became fashionable in the eighties, had boycotted anything to do with South Africa as requested by people like Mandela. For people like my mother, seeing him there in that park was the culmination of a struggle that had spanned more then 30 years in an attempt to win equality for the people of South Africa.

For most of those years Nelson Mandela was in jail, but from his cell on Robben Island he became the face of the struggle, the icon of the revolution. But who was this man and where did he come from before his name became synonymous with the anti-apartheid movement? To help answer that question Palm Pictures has released Mandela, the fourth installment in their astounding Palm World Voices series.

As with the three prior releases — Africa, Vedic Path, and Babba Maal — Mandela is comprised of a DVD, a CD, a full colour booklet, and an extensive National Geographic map. Not only do these packages give you insight into a particular person or region, but undertake to place them in a social/political, historical, and cultural context. In the case of Mandela, that's inseparable from the subject matter. 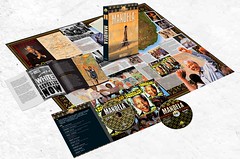 The DVD that is included in this package is the 1997 Academy Award nominated documentary Mandela: Son Of Africa, Father Of A Nation. The filmmakers used stock and archival footage to recreate the historical events of fight for freedom in South Africa, and intertwine them with present day interviews with some of the principle figures in Mandela's personal and political life.

They also have the man himself narrate his younger days and he comes across as remarkably unaffected. Whenever I listen to a renowned person speak of themselves, I don't so much listen to the words but how they are said. When Mr. Mandela talks about himself there is none of the false humility that you so often hear from the mouths of "celebrities".

He talks openly and plainly about his life without hiding his accomplishments or playing down his setbacks; each of them apparently of equal value in his eyes. I tried, with very little success, to visualize any political figures from our society acting in a similar fashion.

For those of us who only know Nelson Mandela as the symbol of resistance and the elder statesman of a nation, the question of who was this man prior to his incarceration and what had he done to merit the idolatry showered on him by his people begins to be answered by this DVD. Neither does it shy away from the controversies in his personal life; the multiple marriages, and the politically motivated separation and divorcing of his second wife Winnie Mandela.

Although politics and the social situation are of course the primary focus of any study of the man Nelson Mandela, the Palm World Voices package utilizes the diversity of the music that made up the soundtrack of the documentary to provide an overview of the different musical styles of South Africa. The CD included in this package is the soundtrack for the DVD, but can also be seen as a documentary in its own right.

It provides a history of the music of the people; as they matured politically and became more militant it was only natural that their music became more militant and nationalistic in tone. What was most commendable on the part of the producers was the fact that they resisted the temptation to utilize a good deal of popular European and North American music that had been written about the struggle and confined it to primarily South Africans.

With the exception of "Free Nelson Mandela" by The Specials, the music comes from musicians native to the country and is indicative of the different cultures of South Africa. As was the case with most of the artificially created borders in Africa, the nation that is South Africa contained many nations with distinct languages and beliefs. While ethnic hatreds have proven horribly deadly in places like Rwanda and Uganda, South African black leaders had realized early on that they must unite as one people in order to gain freedom.

This doesn't mean there weren't problems. The justly proud Zulu people wanted to ensure that they were not going to lose the powers that they had as rulers of their own little fiefdom under the homeland restrictions of Apartheid. In an attempt to polarize the people along tribal lines, the white government had created "homelands" to which all black South Africans were tied. A black person could only live in their "homeland" unless they were given special permission to travel from the place of their birth.

Not only did this curtail freedoms and enforce poverty by prohibiting travel in search of better work or permanent residences in the cities, it served to separate the nations so they could be played one against the other. But because of the message of inclusion that Mandela and the African National Congress had preached since the 1950s, the horrors of Biafra and Rwanda were not repeated in South Africa. There was still violence, but it paled in comparison to the genocides of the other two countries.

So on the CD you'll hear the sounds of the Zulu nation next to the original jazz sounds of the '40s by the first wave of South African popular musicians. Of equal quality are the segments of the original score from the documentary that have been included on the CD. In the movie they assist in the creation of ambiance, but here they serve to remind us of the source for this album of popular music and its subject matter.

The Palm World Voices series was created with the intent of giving their owners as complete an immersion as possible in the subject's culture as modern media can allow. Music, video, and support material have been combined in superb packages to achieve that end. In the case of Mandela they were faced with the challenging prospect of doing that job for one of the iconic figures of the past century.

While no one will probably ever be able to claim to tell the definitive story of Nelson Mandela, Palm World Voices, Mandela offers a record of a remarkable man and the country he was willing to die for "if needs be" If you ever wondered why Nelson Mandela and not somebody else; after watching, listening and reading this material, that will no longer be a question without an answer.