The quality of Ben Consoli's voice is different from the usual fare.

Violet Nine is an alternative five-piece band hailing from Boston consisting of Ben Consoli, vocals; John Ducharme, guitar and keyboard; Gegg Faucher, drums; Tom Gallo, bass; and Nick Lewis, guitar. Forming when its members were still in college, they write the music they play, which can best be described as pop music. There's a familiar sound on their debut CD Any Wonder; it puts you to mind of Journey or maybe even REO Speedwagon, but with a new twist and modern edge. 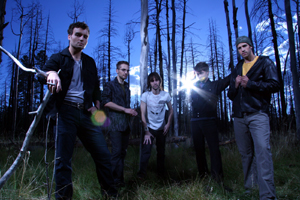 Even though it is reminiscent of that powerpop '80s fare, it is by no means a clone. There is a new twist to it; especially on "Out Loud," "All That Glitters," and "Hope." The latter isn't nearly as uplifting or hopeful as one would expect, the lyrics are actually about desperate need. You wouldn't need to sing a note to get the message; the cyclic chord structuring, the tempo, and the crescendos are enough to make the most sedate anxious.

Standing out in the sea of lighter fare are the fourth and fifth tracks, "I've Seen You Before" and "Images of Me," though nothing on the CD crosses into what could be considered hard or heavy. These tracks are just more edgy than the other eight.
On "I've Seen You Before," the sharp lyrics are backed with screaming guitar riffs. With "Images of Me," it's the delivery of the vocals that gives the song its edge. They don’t go as far as giving way to screams, but there is a mournful plea worthy of a classic rock ballad.

The quality of Ben Consoli's voice is different than the usual fare. It has a smokey texture that blends nicely with what's behind it. This is most evident on "Leaving Rain;" it coveys the deep and intense emotions the song evokes as he effortlessly hits the higher notes, yet is expressive even when delivering lyrics that are just short of screamed.

In addition to the twelve listed tracks, there is an interesting bonus one minute, twelve second soundscape. It weaves the sounds of crashing ocean waves with an uncharacteristic instrumental. It is only identified as "bonus" with no name, description, or explanation anywhere. Somehow, it does seem like an apropos closing to the album.

Violet Nine has been getting a lot of attention — Pure Volume included them as a 'pure pick' and AOL posted a track on the new rock first page. Knowing the importance of self promotion, Violet Nine has a MySpace profile. Bassist Tom Gallo was skeptical about the online community at first, however.

I actually didn't like the idea, but it's important to know how to drop your ego. Nobody's going to fight for you; you've got to do it for yourself…it's not selling out, it just giving yourself some exposure. We know how many kids use the site and how many bands are on it. It's nice because you get that feedback, that interactivity. You get that at concerts, but then it's over and you go home…we like to not separate form fans. We like to make friends with our fans. MySpace lets us do that and get that feedback at the same time. (Reportermag.com)

Aside from their myspace profile you can keep in touch with what's going on with Violet Nine at the band's official website.

All in all, Any Wonder is a alternative rock/pop CD that is well worth the money spent; an enjoyable blend of retro and new, with a distinctive voice delivering quality songs.