The True False Identity sees T Bone coming back with a vengeance.

It always amazes me how easy it is to form associations between an artist and a genre based on work he or she has done outside of their own area of expertise. Most often this will occur in the case of musicians who take leave of their solo careers to focus on movie soundtracks. Even if they have only produced the music, not actually composed it or performed it, in our minds they become synonymous with that genre.

This was brought home for me forcibly upon listening to T Bone Burnett’s first solo album in 14 years, The True False Identity. In the minds of a lot of people, myself included, no other name has been more closely associated with the revival of interest in early Americana music. From his work with the Coen Brothers in movies such as O Brother, Where Art Thou? and The Ladykillers, his behind the scenes work on albums by Alison Krauss, Counting Crows, Gillian Welch, and his composing of soundtracks for Walk The Line and The Big Lebowski Burnett became associated in a lot of people’s minds with that style of music.

In this classic example of you’re only remembered for what you’ve done most recently, this material drove out of people’s minds the memory of songs like “Heffner and Disney” and “When The Night Falls” from Burnett’s days as a solo artist. Emotionally searing and socially aware, songs like those were musically as night to day the tracks from the majority of the projects mentioned above.

After the last record (1992’s The Criminal Under My Own Hat), I felt I could write some new songs and go around the track again, but I didn’t feel that I would get anywhere. The road had become too difficult. Music had come completely apart for me. But more importantly, I didn’t have anything I wanted to say. It all seemed pointless, so I decided to explore some of the other ideas that were coming my way. I needed freedom. I needed time to find another way into playing music again. (T Bone Burnett) 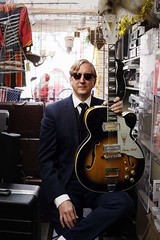 The True False Identity sees T Bone coming back with a vengeance. If you thought his music packed an emotional wallop before, well suffice to say that this disc makes anything that came before it seem minimalist in comparison. His years in the control booth seem to have opened his mind and ears to how he could match the emotional impact of his lyrics musically.

The songs on True False Identity are beyond the realm of popular music, and have wandered into the area of sound compositions or aural paintings. Each song on the disc has its own unique layers of emotional texture that he evokes with the variety of sounds that are possible to generate with instruments.

I know that sounds pretentious as hell, but it’s the simple truth. If there is any commonality to be found between the music that T Bone has created for this disc and the stuff he’d been working on for the past 14 years, it’s the fact that they share an emotional honesty that is scarce in most of today’s plastic packaged product that passes for music.

In traditional roots music the simplicity of the musical accompaniment accentuates the emotional truths in the performer’s voice and lyrics, in this music the voice and music work together to provide emotional resonance. Opera arias work in a similar manner, while the lyrics are telling the story, the voice that’s singing becomes another instrument.

In Burnett’s work it’s almost like the opposite effect is accomplished. Instead of the vocals, and thus the lyrics, blending in to be a part of an emotional soundscape, the music becomes another voice articulating the themes of the song.

I have been working on this sound for a long time. We had done a great deal of experimentation in the studio and getting the sound was not something that could be gotten to quickly… I wanted to put listeners in the middle of this new sound, to experience it almost in 3D. I told the band to imagine we were playing in an auditorium, and to imagine that auditorium as a giant maraca and that we wanted to shake the audience as if they were beads inside the maraca. (T Bone Burnett)

Lyrically T Bone is as funny, ironic, and truthful as ever. The True False Identity is divided into two parts. Part one is titled “Art Of The State” and it contains songs that are primarily concerned with observations on society. “Poems Of The Evening”, part two of the disc, puts a more personal perspective on display, while still keeping an eye on the world.

From indictments of society’s willingness to be sheep in part one’s “Zombieland” to the insecurities of modern relationships on part two’s “Baby Don’t You Say You Love Me” T Bone Burnett isn’t afraid to talk about subjects that other’s wouldn’t touch with a ten foot poll. Even in those areas that others might touch upon, Burnett’s approach is so unique and emotionally honest it can sometimes sound like nobody has ever written about this subject before.

This is a disc that can’t be easily classified as “good” or “bad”. You may not personally like the music, or you may adore it, but those aren’t grounds for judgment on the quality of The True False Identity. I personally think it’s a work of pop music genius as it pushes the boundaries of the genre in directions that nobody has dared to in years.

It’s not a disc I am ever going to throw on for light background listening, nor is it one I will put on without careful consideration beforehand. The very elements that make it so brilliant, raw emotional truths, intelligent lyrics, and music that reflects all of that, also make it difficult to listen to if you are not prepared to pay attention.

Like any work of art, different people will perceive different things from their experience listening to this disc. To me is the best recommendation I could ever offer for anything.